TEHRAN (Tasnim) – The Iranian archaeologists are studying the authenticity of a ceremonial drinking vessel said to have been looted from a cave in Iran and seized by US customs officials a decade ago, which the US administration presented to President Hassan Rouhani as a gesture of goodwill.

“The claim made by some that the silver rhyton presented to us is a replica is baseless and we consider the move as a sign of good will of the Americans as the US experts believe this objects is original,” said the head of Cultural Heritage, Tourism, and Handicrafts Organization in a TV interview.

Najafi, who accompanied President Rouhani on his New York trip to attend the annual UN General Assembly in September, said in an interview with IRIB Channel I News, aired on Sunday night, that the Iranian experts are studying the matter.

Even if the 2,700-year-old silver drinking cup is a fake one, we consider it as a sign of the US good will, added Najafi.

He argued that the artefact which had been smuggled into the US in 2000 was to be sold to a collector for $950,000, but when federal agents caught wind of the sale, they seized the artefact and arrested the dealer on smuggling charges in 2003.

“How could a fake object have such a high price?” he asked. 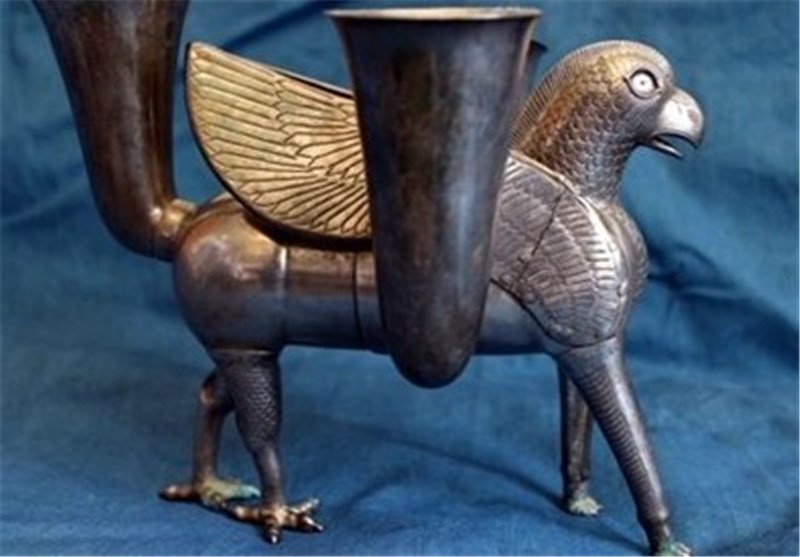 President Hassan Rouhani said upon arriving back in Tehran in a meeting with the press that after a phone call on Thursday, the Americans presented the 2700 year-old silver chalice in a ceremonial event.

“The Americans called on Thursday and said, ‘We have a gift for you’. Then they brought the chalice, escorted and in a ceremonial manner and announced: This is our gift to the Iranian nation,” Rouhani said.

The president added, “We are glad that we have brought back this artifact with us to Iran and the fact that it is now in Iran. This is a precious historical work that is a sign of the ancient Iranian civilization.”

The piece was gathering dust in a US customs warehouse for years. Customs officials would say they could not return it to Iran until relations between Washington and Tehran were normalized.

The silver drinking cup, cast in the shape of a winged griffin, was looted from a cave in Iran and seized by US customs officials a decade ago.

"It is considered the premier griffin of antiquity, a gift of the Iranian people to the world, and the United States is pleased to return it to the people of Iran," the US State Department said.