TEHRAN (Tasnim) – Bahraini sources announced that the voter turnout in the anti-regime referendum, which was held to show the people’s strong opposition to the rule of Al Khalifa royal family, was high, adding that 99.1% of those who cast their votes supported a new political system.

From 250,000 eligible voters in the referendum, 178,625 cast their ballots and the figure shows a 71.4 percent turnout in the polls, Bahrain’s National Independent Commission for Popular Referendum said in a statement.

177,118 people accounting for 99.1 percent of voters answered yes to the referendum, the commission said.

The independent commission also announced that the referendum was held in compliance with the international standards.

The anti-regime polls named “self-determination right” asked the Bahraini citizens if they would like to determine their own destiny and elect a new political system in the Sheikhdom under the supervision of the United Nations.

The referendum was started on Friday and continued on Saturday concurrently with the state-run parliamentary elections, which was boycotted by the opposition groups. 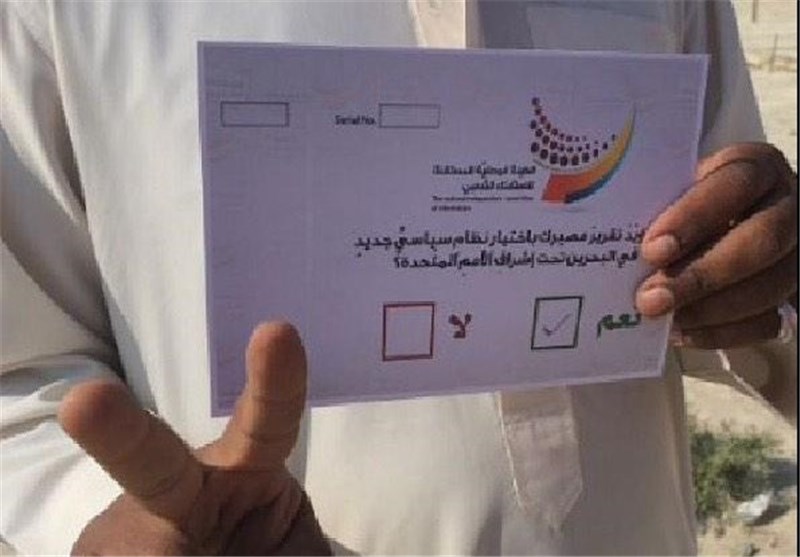 The Bahraini monarchy has been ruled by the Khalifa dynasty since 1783, in a country where the Shiite Muslim community accounts for nearly 70 percent of the entire population.

Anti-regime protests have been underway in Bahrain almost on a regular basis since 2011.

The protesters demand the establishment of a democratically-elected government and an end to the regime crackdown.

Scores of people have been killed and many others put behind the bars in the Saudi-backed clampdown during the past three years.