TEHRAN (Tasnim) - A group of 47 Republican senators has written an open letter to Iran's leaders, warning them that any nuclear deal they sign with US President Barack Obama's administration won’t last after Obama leaves office.

The letter has been organized by freshman Senator Tom Cotton and signed by the chamber's entire party leadership as well as potential 2016 presidential contenders Marco Rubio, Ted Cruz and Rand Paul, according to Bloomberg View.

The letter is meant not just to discourage Iran from signing a deal but also to pressure the White House into giving Congress some authority over the process.

“It has come to our attention while observing your nuclear negotiations with our government that you may not fully understand our constitutional system… Anything not approved by Congress is a mere executive agreement,” the senators wrote. “The next president could revoke such an executive agreement with the stroke of a pen and future Congresses could modify the terms of the agreement at any time.” 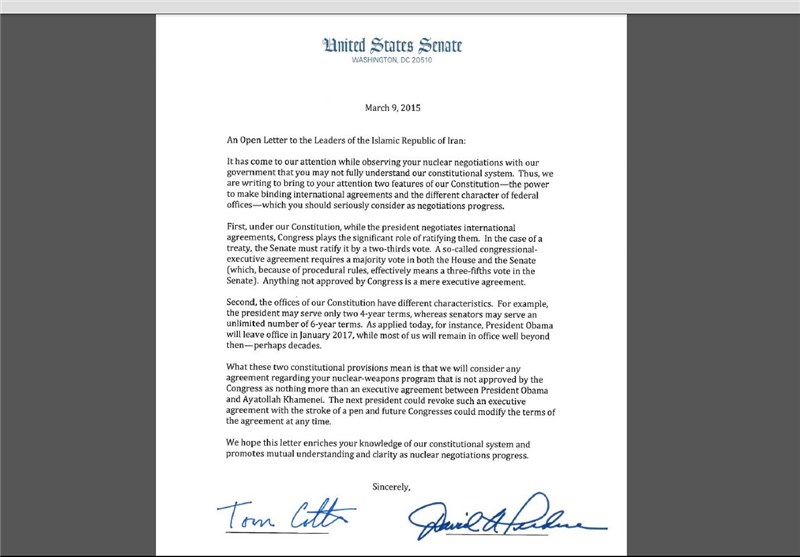 Arms-control advocates and supporters of the negotiations argue that the next president and the next Congress will have a hard time changing or canceling any Iran deal, especially if it is working reasonably well.

The new letter is the latest piece of an effort by Senators in both parties to ensure that Congress will have some say if and when a deal is signed.

Still, Senators from both parties are united in an insistence that, at some point, the administration will need their buy-in for any nuclear deal with Iran to succeed.

There’s no sign yet that Obama believes this -or, if he does, that he plans to engage Congress in any meaningful way.

Parliament Speaker: Iranian Nation Not to Give in to US Pressures