TEHRAN (Tasnim) – Spain will begin their bid for an unprecedented third successive European Championship title against Czech Republic while hosts France will open the 2016 tournament against Romania after the draw was made on Saturday.

Delegates were met by tight security at the Palais des Congress but one man notable by his absence was UEFA president Michel Platini, architect of the biggest-ever expanded 24-team finals that will run from June 10 to July 10.

Instead of taking centre stage, the leader of European soccer's ruling organization was banned under the terms of his provisional 90-day FIFA suspension that forbid him from any involvement in the sport, pending investigations into his financial arrangements with world football's governing body, Reuters reported.

Swiss Sepp Blatter, who usually attends these gala events in his position as FIFA president, was another notable absentee, banned under the same terms as Platini while scandal-ridden FIFA probes his financial dealings with the Frenchman.

UEFA general secretary Gianni Infantino, who has declared his candidacy for FIFA presidency in February's election, conducted the draw.

Infantino made no reference to FIFA matters but he did talk about the attacks on the French capital by Islamic State in Iraq and the Levant on Nov. 13 that killed 130 people.

"We are in Paris, a city that only a few weeks ago witnessed tragic events. I wish to express my solidarity to the French people...our thoughts are with the victims," he told around 1,500 delegates.

The first team drawn out were hosts France, designated position A1 to ensure they played in the opening match at the Stade de France in Saint-Denis where one of the Nov. 13 attacks took place.

France, who won Euro 1984 and the 1998 World Cup on home soil, kick off against Romania on June 10 before meeting Albania in Marseille five days later and Switzerland in Lille on June 19.

Les Bleus coach Didier Deschamps told reporters: "We don't know the Romanian team that well even though they performed very well during the qualification stage with the best defence and just two goals scored against them.

"It is the most important match for us. We have to be careful and not be over-confident."

Spain, who were also drawn in the same section as Croatia and Turkey, open up against Group D opponents Czech Republic in Toulouse on June 13.

Vicente del Bosque, the coach of Spain, said: "We've drawn two teams who played in the same group as the Netherlands and eliminated them, Turkey and Czech Republic.

"Then we have to face Croatia who are very strong and who are among the strongest teams at this tournament. They have excellent players."

World Cup winners Germany, who landed the last of their three European Championship titles in 1996, start against Ukraine in Lille on June 12 before facing Poland and Northern Ireland in Paris.

Germany coach Joachim Loew said: "Poland are a great side but Ukraine and Northern Ireland can be difficult to play against too with their counter attacks and strong defending. We are the favourites and want to win the group."

England, who won all 10 of their qualifiers, are the favourites in Group B. They take on neighbours Wales, who are taking part in their first major tournament finals since the 1958 World Cup, along with Russia and Slovakia.

It will be the 102nd meeting between England and Wales since they first clashed in 1879. England have won 66 times and Wales only 14.

Belgium, currently the best team in the world according to the FIFA rankings, are in a tough Group E along with Italy, Sweden and Ireland.

The tournament, being staged in 10 cities, sees 16 teams advance from the group stage -- the top two in each section and the best four third-placed sides -- with the final in Paris on July 10. 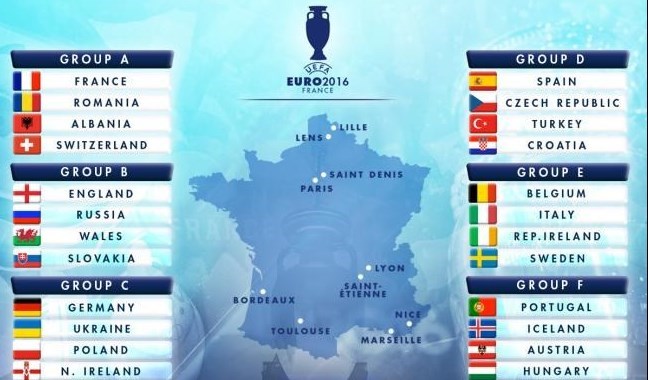