TEHRAN (Tasnim) – Iranian President Hassan Rouhani took a swipe at the US for violating the Joint Comprehensive Plan of Action (JCPOA) recurrently, saying such conduct would be to the detriment of the nuclear deal.

“The recurrent violation of commitments by the US administration and imposing new sanctions against Iran have negative impacts on the Iranian nation’s public opinion and could be detrimental to the process of implementation of the JCPOA,” the Iranian president said in a meeting with European Union Foreign Policy Chief Federica Mogherini in Tehran on Saturday.

He further reaffirmed Iran’s commitment to honoring the JCPOA, the nuclear agreement between Iran and the Group 5+1 (Russia, China, the US, Britain, France and Germany), stressing that Tehran will keep carrying out the accord as long as the other parties do not violate it.

Unlike certain parties, Iran has fully honored its commitments under the nuclear deal, the president added, calling for plans to implement a major part of the JCPOA that entails facilitation of economic, banking and business interaction with Iran.

Hailing the role that the EU played in the achievement of the JCPOA, Rouhani said all parties are now responsible for maintaining the deal that has taken a great deal of effort to be signed.

President Rouhani also praised the progress in Iran-EU relations over the past four years, stressing the need for more steps to promote cooperation on the bilateral and regional issues.

There are suitable grounds for investment in Iran’s energy sector, as in the oil, gas and petrochemical industries, the president noted, calling for the enhancement of ties with the EU in all fields. 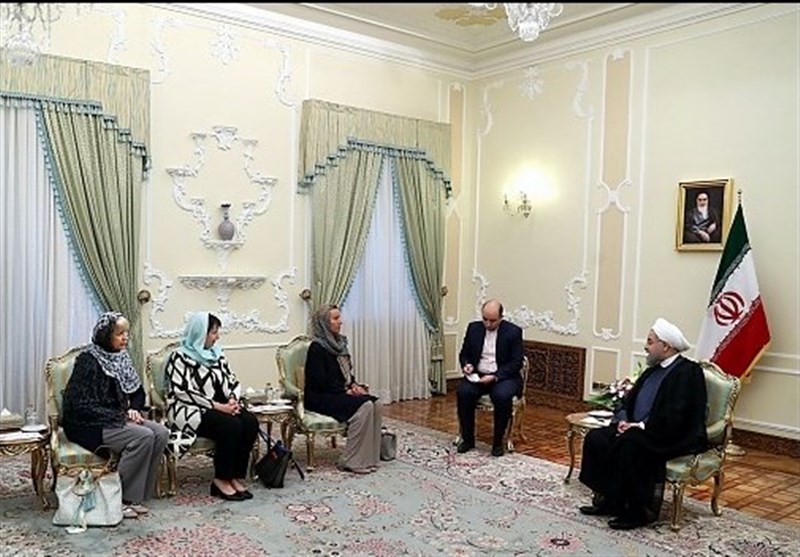 For her part, Mogherini said the EU seeks to devise a comprehensive plan to guarantee the full implementation of the JCPOA.

Europe attaches great significance to the JCPOA, which has resulted in the successful implementation of more than 80 percent of trade activities between Iran and the EU, she added.

Confirming Iran’s full compliance with the nuclear agreement, Mogherini reiterated that the JCPOA is a multilateral deal that must be maintained by the whole parties and the international community.

She finally described the presence of an EU delegation in Iran for President Rouhani’s inauguration as a major political decision that signifies Europe’s resolve to enhance ties with Iran and to preserve the JCPOA.

Heading a delegation, Mogherini arrived in Tehran on Friday night to join the other foreign dignitaries attending the presidential inauguration.

President Rouhani will be sworn in at the Iranian parliament on Saturday evening.

Ms. Mogherini had a major role in the nuclear talks between Iran and the Group 5+1 which resulted in the JCPOA in July 2015. She was tasked with liaising with Iran on behalf of the six countries in the course of nuclear talks.