At Least 3 Dead in Amtrak Derailment in Washington State, US Official Says

The Amtrak Cascades 501 was making its first trip on a new service route when the train ran off the track near DuPont, spilling 13 cars off an Interstate 5 overpass onto rush hour traffic below, authorities said.

All the deaths were contained to the train, said Ed Troyer, the Pierce County Sheriff's Office spokesman.

Amtrak President & Co-CEO Richard Anderson said "Positive Train Control" was not activated on the tracks when the derailment happened. PTC is a technology that automatically slows down, and eventually stops, a train if it senses it is going too fast.

Thirteen cars jumped the track. The train had 14 cars, including two engines, said Brook Bova of the Washington State Patrol.

A passenger on the train says his car derailed and everyone "catapulted" into the seat in front of them.

The National Transportation Safety Board sent a 20-member team to investigate.

Photos from the scene show at least one train car on the road, with another dangling over it.

The crash happened about 7:40 a.m. in DuPont, about 20 miles south of Tacoma, near the Billy Frank Jr. Nisqually National Wildlife Refuge. Apparently, the train came out of a curve and ran off the track while crossing or approaching an open trestle over I-5. The following rail cars derailed in a jumble on both sides of the track, with some falling to the highway and landing on vehicles and one rail car dangling precariously over the highway. 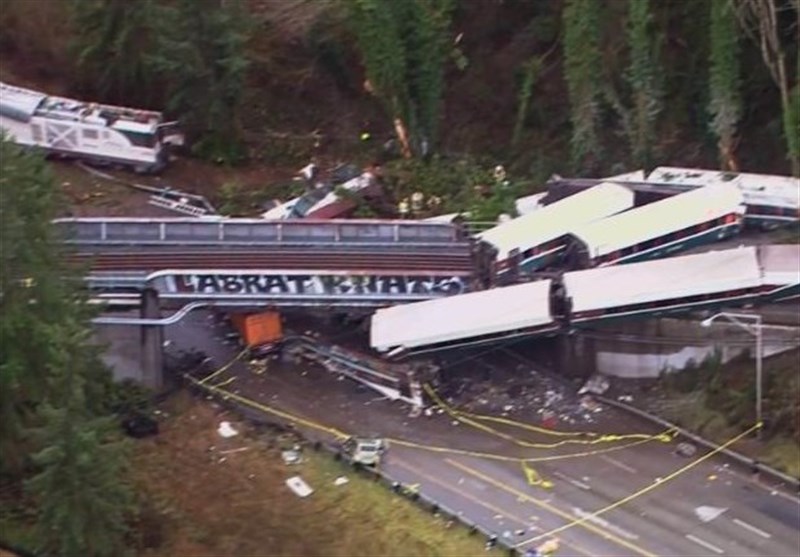 Several motorists in vehicles that were struck by the fallen train cars suffered injuries, but there were no fatalities among people in those vehicles, the sheriff's office said. Five cars and two semi-trucks were involved in the crash, Bova said.

The NTSB and local authorities have not said what caused the crash, but questions were quickly raised about the train's speed as it hit a curve.

Most of the route was graded for a maximum speed of 79 mph; the speed limit on the curve where the crash occurred is 30 mph, said Rachelle Cunningham with Sound Transit. Cunningham said she did not know how fast the train was traveling when it derailed, and the NTSB has not released information about the speed.

In a conference call with reporters, Amtrak President and Co-CEO Richard Anderson said "Positive Train Control" was not activated on the tracks at the time of the derailment. Positive Train Control is a technology that automatically slows down, and eventually stops, a train if it senses the train is going too fast and could derail or get in an accident.

Anderson would not answer CNN's questions regarding the speed of the train or the crew's tenure at Amtrak.

The train was running on track previously used for occasional freight and military transport, the Washington Department of Transportation said in a news release. WDOT said the track had undergone millions of dollars of federally funded improvements and weeks of inspection and testing.

Emergency radio transmissions between the train conductor and the dispatcher were frantic and dramatic:

AMTRAK 501: Uh, we were coming around the corner to take the bridge over I-5 there, right north into Nisqually and we went on the ground.

Dispatcher: ...Is everybody OK?

AMTRAK 501: I'm still figuring that out. We got cars everywhere and down onto the highway.

Chris Karnes, a passenger on the train, is chairman of the Pierce Transit Community Transportation Advisory Group. He said he boarded the train between Seattle and Tacoma and took a seat on the third or fourth car. 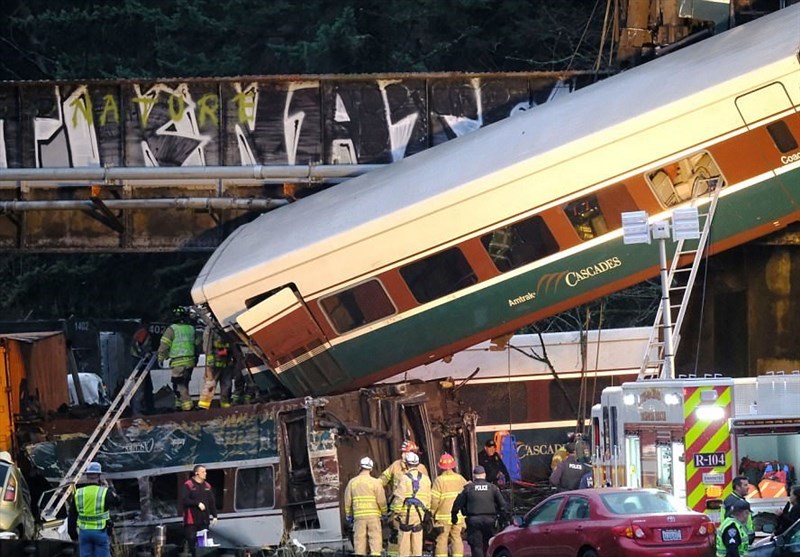 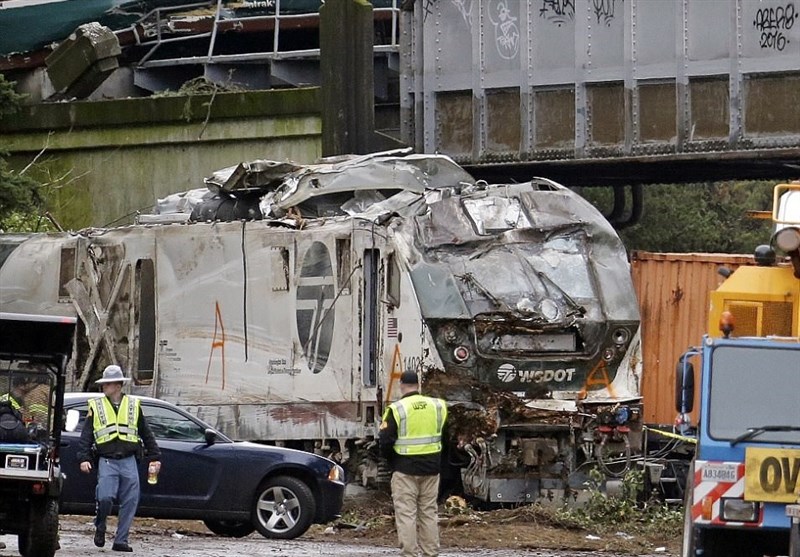 Karnes said the train was moving at a "pretty good pace" -- roughly 70 to 80 mph, judging from the fact the train was passing cars on the highway -- when it derailed.

"We felt a little bit of a jolt and then at a certain point we could hear crumpling of the train car, and we were catapulted into the seats in front of us," he said.

It appeared most of the passengers in Karnes' car fared well, with the exception of an elderly man who banged his head on the bulkhead, he said.

Karnes' car derailed -- only the rear locomotive remained on the tracks -- and passengers kicked out a window and climbed down an embankment to summon help, he said.

He did not know what caused the derailment but said the train had previously taken tighter curves at the same pace without any issues.

Motorist Danae Orlob said there was a semi and a crushed truck underneath the train cars.

"We came around the corner and it had to have just happened ... there were no police there yet. There was one link of the train off to one side and the other on the other side of the freeway. There were crushed cars underneath. There was an insane amount of fire trucks and ambulances heading towards us."

All southbound lanes of the interstate were closed due to the derailment, and the sight stunned motorists heading to work.

"I was traveling to work this morning along I-5 and we came to a sudden stop," Greg Mukai told CNN by phone. "We all tried to stop quickly to avoid running into each other, to be honest. Once we all came to a stop I was able to look up and see, unfortunately, this scary thing of ... a train hanging off of the overpass. Lots of military personnel and people ran to try to help the best they could."

Hours after the early morning crash, first responders remained on site as the investigation was getting underway.

Lights and portable toilets were being moved to the scene and police were keeping a wide cordon from the crash site. News helicopters and remotely piloted drones circled over the crumpled wreckage. 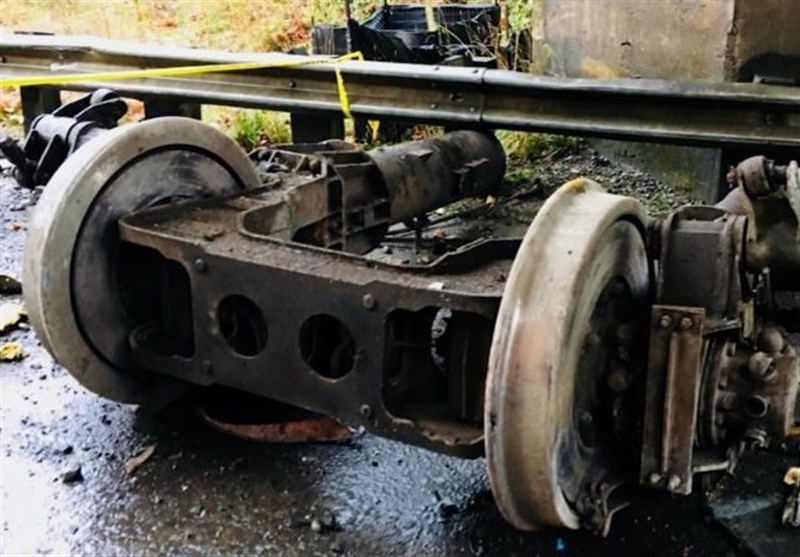 West Pierce County Fire and Rescue Battalion Chief Jay Sumerlin said all the rail cars had been searched Monday night -- a precarious operation because of the position of the derailed train.

"It took a lot of extrication tools," he said. "They were using Jaws of Life, they were using air chisels, different forms of saws to be able to get into some of the cars to get access to people to get them out. Some of the rescues were done by ladders. It was just a difficult place to be."

Hazmat teams were still securing as much as 350 gallons of spilled diesel fuel, he said.

A makeshift emergency operations center was set up at a nearby Eagle Pride Golf Course, where the NTSB and other federal and state authorities were coordinating the recovery and investigation into the crash.

Only the rear unpowered locomotive, one of 14 cars on Amtrak Cascades 501, remained on the tracks, positioned on a sharp curve at the end of a straight path of track.

According to an online schedule, the 501 train connects "18 cities along the I-5 corridor including Seattle, Portland, Vancouver, BC, and Eugene, Oregon."

The train service is jointly owned by the Washington and Oregon departments of transportation, although Amtrak contracts to operate the service for the two states.

The American Recovery and Reinvestment Act of 2009 set aside $800 million for the Cascades High Speed Rail Capital Program between Seattle and Portland, the Washington Department of Transportation said. The last portion of the Cascades program included $180 million for the area where the crash occurred, the 14.5-mile Point Defiance Bypass. That bypass rerouted passenger trains from a waterfront line to a shorter line that ran along I-5. Monday was the first day trains ran along that route.

Previously, the tracks where the derailment occurred were owned by BNSF and were used for occasional freight and military transport, said the Washington State Department of Transportation. The tracks are now owned by Sound Transit, which managed the track upgrade in preparation for commuter service, the release said.

When asked if there were any known issues or blockages to the track, Kimberly Reason, a senior public information officer with Sound Transit, said, "We are working with the Joint Command Center on scene to receive information from the incident investigation; no cause has been reported at this juncture in the investigation."

Amtrak service south of Seattle was temporarily suspended. Service from Seattle to points north and east was continuing to operate, Amtrak said. Amtrak Cascades trains 504 and 509 were canceled, the Amtrak spokesperson said.

TSB Vice Chairman Bella Dinh-Zarr said the first members of the investigative team were expected to arrive in Washington State on Monday afternoon.

President Trump posted a tweet about what he called the country's crumbling infrastructure.

"The train accident that just occurred in DuPont, WA shows more than ever why our soon to be submitted infrastructure plan must be approved quickly. Seven trillion dollars spent in the Middle East while our roads, bridges, tunnels, railways (and more) crumble! Not for long!"

"My thoughts and prayers are with everyone involved in the train accident in DuPont, Washington. Thank you to all of our wonderful First Responders who are on the scene. We are currently monitoring here at the White House."

Washington Gov. Jay Inslee declared a state of emergency and asked motorists to avoid traveling on Interstate 5 while the Washington Department of Transportation works on alternate routes.

42 Injured in US Train Crash: Authorities

42 Injured in US Train Crash: Authorities

Biden Pulls Together Hundreds of Lawyers as Bulwark against Election Trickery

Asians in US Face Racial Bias amid Outbreak, Survey Finds

Iran Issues Statement on Anniversary of Abduction of Diplomats in Lebanon