TEHRAN (Tasnim) – Iranian Foreign Minister Mohammad Javad Zarif said there was solid consensus on the need for preserving the Joint Comprehensive Plan of Action (JCPOA) in a meeting he had with the European Union’s diplomatic chief and the foreign ministers of Britain, France and Germany on Thursday

Iran is complying with the JCPOA and the Iranian people have every right to all its dividends, he added.

The Iranian top diplomat also reiterated that any move that undermines JCPOA is unacceptable and that the “E3 and EU (are) fully aware that Iran’s continued compliance (is) conditioned on full compliance by the US.”

The European officials who attended the meeting also underlined support for preserving the Iran nuclear deal. 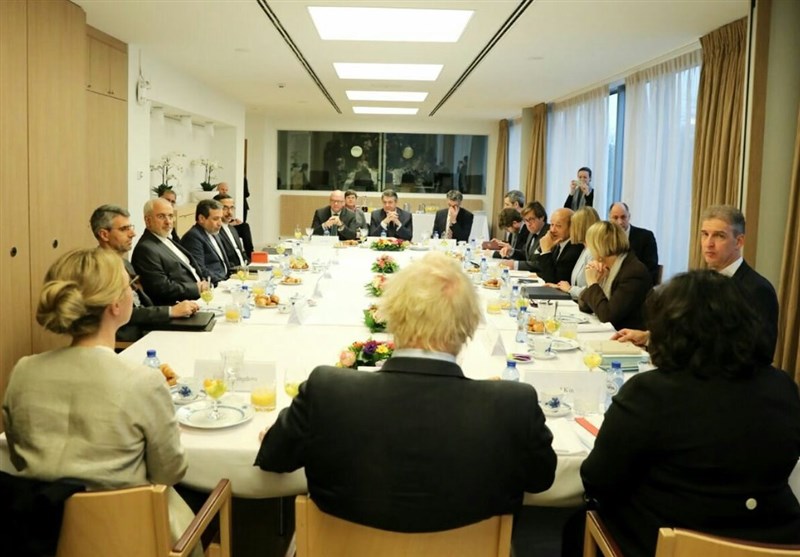 European Union’s diplomatic chief, Federica Mogherini insisted that the Iran nuclear deal “is working” and that it is vital to preserve the agreement.

“The deal is working, it is delivering on its main goal which means keeping the Iranian nuclear program in check and under close surveillance,” Mogherini said.

The British foreign minister, Boris Johnson, said that so far no-one has come up with a better alternative.

“We greatly value the JCPOA, the nuclear deal with Iran, we think it is a considerable diplomatic accomplishment,” Johnson said, stressing that “Iran is in compliance with this agreement according to the International Atomic Energy Agency.”

Iran and the Group 5+1 (Russia, China, the US, Britain, France, and Germany)- also known as E3+3- reached a conclusion over the text of the JCPOA in July 2015 and implemented it in January 2016.

Under the agreement, certain limits have been put on Iran’s nuclear activities in exchange for, among other things, the removal of all nuclear-related bans against Tehran.

In all of its reports since coming into force of the JCPOA, the IAEA has verified the non-diversion of declared nuclear material in Iran as well as the Islamic Republic’s commitment to the nuclear deal.

Meanwhile, US President Donald Trump must decide this week whether to waive nuclear sanctions on Iran or effectively end the United States’ participation in the nuclear agreement.

By Friday, Trump must decide to approve an extension or scrap the deal altogether.

In October, Trump said he would not certify Iran’s compliance with the nuclear agreement that was negotiated under the previous administration because it was “in violation of the spirit” of the accord.

The Trump administration asked Congress then to come up with and pass a companion agreement that addresses those issues.

It said it would also like Congress to amend the legislation that gives lawmakers the authority to slap sanctions on Iran if it decides Tehran is in violation of the nuclear agreement, outlining “trigger points” instead that set off automatic sanctions.

Trump said he wants Congress to fix “the deal’s many flaws” such as existing sunset provisions.

US Secretary of State Rex Tillerson said last week that Trump would be inclined to authorize another sanctions waiver if he felt that real progress was being made toward the changes he demanded in October.

JCPOA Is Working, Must Be Preserved: EU's Mogherini

Iran Renews Call for All to Honor JCPOA