TEHRAN (Tasnim) - Leaders from around the globe condemned the deadly attacks at two mosques in New Zealand’s Christchurch region during Friday prayers.

Iranian Foreign Ministry strongly condemned the terrorist attacks on two mosques in New Zealand, calling for punishing those behind the “racist” and “savage” move.

In a statement on Friday, the Ministry deplored the attacks on two mosques in Christchurch as “inhumane and totally savage”. 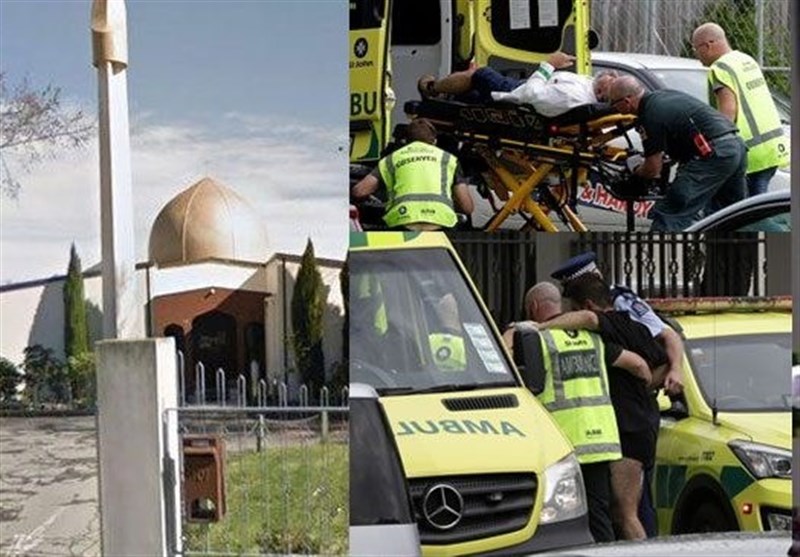 Here is the Latest on global reactions to the deadly shootings in two mosques in New Zealand:

Turkish President Recep Tayyip Erdogan has condemned the attacks on mosques in the New Zealand city of Christchurch calling it the “latest example of rising racism and Islamophobia.”

Tweeting in English and Turkish on Friday, Erdogan said: “On behalf of my country, I offer my condolences to the Islamic world and the people of New Zealand, who have been targeted by this deplorable act.”

He also wished a speedy recovery to the wounded.

Erdogan is calling on Western nations to rapidly take measures to curb rising racism against Islam and Muslims, saying new attacks such as the mass shootings in New Zealand would otherwise be “inevitable.”

Speaking at the funeral of a former minister on Friday, Erdogan renewed his condemnation of the attack on two mosques in Christchurch.

Erdogan said: “It is clear that the understanding that the murderer — who also targeted our country, our people and my person — represented, has rapidly started to take over Western communities like a cancer.” It was an apparent reference to reports that a suspect had left behind a 74-page manifesto that also threatened Turks.

Erdogan continued: “I call on Western countries especially to rapidly take measures against this dangerous turn that threatens the whole of humanity.”

Bahrain, Kuwait, Oman, Qatar, Saudi Arabia and the United Arab Emirates condemned the attack on the mosques in New Zealand and offered their sympathies over the attack.

Saudi Arabia said one of its citizens was lightly wounded in the attack, but survived.

"My thoughts are with the family of Afghan origin who've been shot and killed at this heinous incident."

Imran Khan wrote Friday on Twitter that “terrorism does not have a religion.”

He added: “I blame these increasing terror attacks on the current Islamophobia post-9/11 where Islam & 1.3 bn Muslims have collectively been blamed for any act of terror by a Muslim.”

Pakistani officials say there are no Pakistani citizens among the dead.

Pakistan has witnessed several attacks on places of worship in the past decade, especially targeting its minority Shiite community.

The top government spokesman of the country has offered his condolences to the victims of mosque attacks in New Zealand and says Japan stands by the people of that country.

Chief Cabinet Secretary Yoshihide Suga, in a regular news conference Friday, expressed “heartfelt condolences” to the shooting victims and their families, while extending sympathy for the injured.

Suga expressed “solidarity with the people of New Zealand.”

Japan’s Foreign Ministry issued an emergency safety advisory to Japanese nationals in the area, urging them to stay indoors and follow instructions from the local authorities.

The ministry also advised the Japanese in Christchurch to closely monitor local news “to secure your own safety.”

So far no Japanese have been affected by the attacks

The government has slammed the attack on two mosques in New Zealand as an act of terror.

Prime Minister Mahathir Mohamad said he regretted the incident and urged the New Zealand government to do its best to “arrest these terrorists.”

The foreign ministry said two Malaysians were wounded and have been hospitalized.

“Malaysia condemns in the strongest terms this senseless act of terror on innocent civilians and hopes that those responsible for this barbaric crime be brought to justice,” the ministry said in a statement.

Foreign Minister Margot Wallstrom has tweeted that she was “shocked by the attack in Christchurch,” saying “we condemn terrorism in all forms.”

Denmark’s Jewish community, which was targeted in a February 2015 attack where a guard was shot and killed, also expressed “shock” at the news of the New Zealand attack.

Security measures are being increased at mosques and other religious sites after the deadly attack against two mosques in New Zealand.

French Interior Minister Christophe Castaner tweeted Friday that he ordered regional prefects to send patrols and reinforce surveillance of places of worship “as a precaution.”

French President Emmanuel Macron, also in a tweet, denounced the “odious crimes against the mosques in New Zealand” and said that France will work with international partners to fight terrorism.

The rector of the Grand Mosque of Paris condemned the attack in Christchurch, which left at least 49 dead.

France is home to western Europe’s largest Muslim community. While French Muslim and Jewish sites are sporadically targeted by vandals, France has not seen a major attack on mosques of the kind that targeted New Zealand.

Khan, said in a statement Friday that the news is “heartbreaking.”

He says: “London stands with the people of Christchurch in the face of this horrific terror attack. London will always celebrate the diversity that some seek to destroy.”

Khan sought to reassure Muslim communities in London following the attacks, saying that the Metropolitan Police would be visible outside mosques.

London mosques have been targeted in the past. One man died and several others were injured in 2017 when Darren Osborne drove a van into people leaving evening prayers. Prosecutors say Osborne was motivated by a hatred of Muslims and been radicalized by far-right propaganda he found online.

In a tweet sent on Friday, Sanchez sent condolences to the victims, its families and the government of New Zealand.

“We emphatically condemn violence and the lack of reason of fanatics and extremists who want to break our societies,” Sanchez has written.

German foreign minister says the attacks on two mosques in Christchurch are a “brutal crime” that touches people of all religions around the world.

In two tweets, Foreign Minister Heiko Maas said Friday Germany’s sympathies were with the friends and families of the victims of the attack.

He says “the horrific terrorist attack in Christchurch targeted peacefully praying Muslims — if people are murdered solely because of their religion, that is an attack on all of us.”

Maas says “we stand at the side of the victims. Stay strong New Zealand!”

Tsai said: “I’m utterly saddened by the mass shooting in Christchurch, #NewZealand. My thoughts go to the victims & their families.”

"We stand here and condemn, absolutely the attack that occurred today by an extremist, right-wing, violent terrorist," Morrison told a press conference.

"Innocent people being murdered as they worship is horrific and heartbreaking. My thoughts and solidarity are with New Zealand's Muslim community and all of its people on this dark day," she tweeted.

She added: "Today, at mosques across Scotland and elsewhere, Muslims will attend Friday prayers. They are a valued part of our diverse and multicultural society. It is terrorists who commit acts such as who offend our values as a society. We must stand against Islamaphobia and all hate."

Indonesia, the world's biggest Muslim-majority country, strongly condemned the shooting as authorities were checking on whether any of its citizens were victims.

"The government and the people of Indonesia convey deep condolences to the victims and their families," Foreign Minister Retno Marsudi said in a statement.

She was earlier cited by media as saying six Indonesians had been inside the mosque when the attack occurred, with three managing to escape and three still unaccounted for.

Rocket Strikes Area near Base Housing US Forces in NE Syria

Rocket Strikes Area near Base Housing US Forces in NE Syria