TEHRAN (Tasnim) – The United States Central Command (USCENTCOM or CENTCOM) has confirmed an IRGC video that was published by the Tasnim News Agency on Saturday showing US warships being monitored in the Persian Gulf waters, south of Iran.

The Persian language Twitter page of the US Central Command wrote in a post last night that the video clip is showing the USS Dwight D. Eisenhower a nuclear-powered aircraft carrier currently in service with the United States Navy, adding that the video was captured when the ship was present in the Persian Gulf back in 2016. 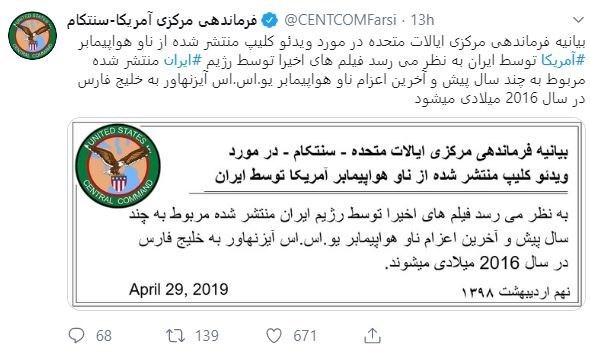 IRGC naval forces released on Saturday a high quality video of close observation of a US aircraft carrier in the Persian Gulf.

On April 8, US President Donald Trump announced that Washington is designating the IRGC a foreign “terrorist organization”, marking the first time the US has formally labeled another country's military a terrorist group.

Responding to the move, Iran’s Supreme National Security Council immediately declared the US as a state sponsor of terrorism and US forces in the region terrorists.

The SNSC said it has put CENTCOM on its terror list as a “reciprocal measure” against the US “illegal and unwise” move.

The Islamic Republic of Iran plays a significant and leading role in establishing security in the Persian Gulf.