TEHRAN (Tasnim) – French President Emmanuel Macron was rushed out of a theater in Paris after protesters tried to confront him.

Dozens of demonstrators had gathered outside the Les Bouffes du Nord theatre on Friday evening where Macron was watching a play, reportedly with his wife Brigitte.

Police tried to hold back the protesters but some managed to enter the building, amid chants of "Macron, resign!" and "We are here, even if Macron does not want us we are here", Sky News reported.

A black car reported to be carrying the French president then sped away under a hail of boos.

According to reports, he later returned to the theater to watch the play - a modernist drama called The Fly.

The incident came on the 44th day of strikes aimed at overturning the French government's plans to overhaul the country's pension system.

On Friday, protesters blocked the entrance to the Louvre museum and forced the famous Paris landmark to close.

Some museum employees were among the demonstrators who chanted: "Mona Lisa is on strike, Leonardo is on strike." 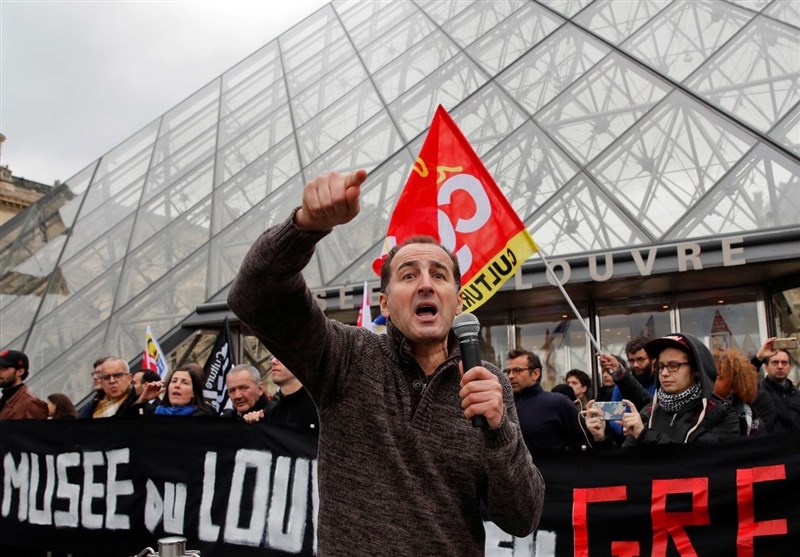 It is the first time since railway strikes and protests against the pension overhaul began on 5 December that the Louvre and its Leonardo da Vinci exhibit were fully shut down.

Several dozen people also invaded the headquarters of the CFDT union, which favors a point-system that Macron wants to put in place to determine retirement benefits.

The protesters were seen on video singing and mocking the union's leader.

Macron condemned the action as violent, unacceptable and "shameful for our democracy."

Unions have called for a seventh round of street marches next Friday, when the contested pension plan is to be presented to France's cabinet.

The weeks of strikes and protests have disrupted public transport, schools, hospitals, courthouses and even opera houses and the Eiffel tower.

Major French retailers Fnac Darty and Casino said that business in France has been badly affected by the strikes.

Fnac Darty said the strikes had cost it around €70m (£60m) in lost revenue.

Meanwhile, Casino estimates that the strikes in December cost it about €80m (£68m) in lost revenue.

The French prime minister's office said earlier this week that the SNCF train authority and the RATP, which runs public transport, had lost more than a €1bn (£852m) since the start of the strike.

While the number of striking workers has diminished since the movement, the country's trains and the Paris subway were still disrupted on Friday.

Japan to Close Schools Nationwide to Control Spread of Virus