TEHRAN (Tasnim) – A team of astrophysicists has witnessed space and time swirling around a dead star, confirming yet another prediction from Einstein's theory of relativity.

Physicists today devote a lot of time to trying to disprove the claims made in Albert Einstein’s theory of general relativity, but each new attempt has continued to prove the theory correct. This newest discovery, evidence of “frame dragging,” is yet again evidence that Einstein was right.

Over 20 years ago, the Parkes Observatory discovered an extreme binary star system called PSR J1141-6545. This system consists of two burned-out, incredibly dense, quickly spinning objects: a white dwarf and a pulsar, which is a kind of denser object called a neutron star that shoots out a beam of particles like a lighthouse beam. The stars orbit each other every five hours. Researchers have observed the pair since then using the Parkes radio telescope and the UTMOST radio telescopes in Australia, measuring the time of arrival of the pulsar’s beam in order to map its orbit around the white dwarf, Gizmodo reported. 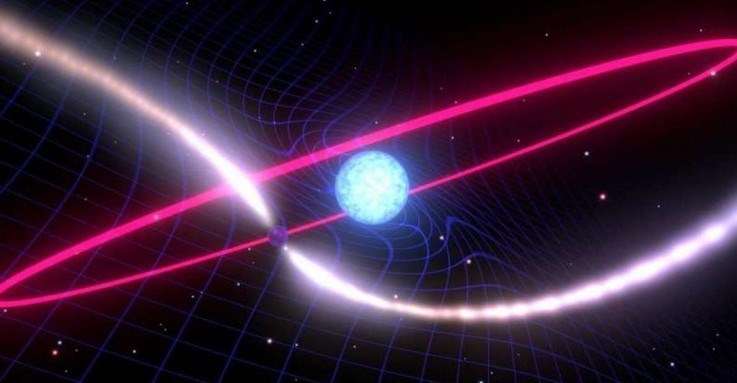 The team was hunting specifically for evidence of frame dragging in these extreme objects, where the white dwarf’s spinning literally drags space-time along with it, like dragging water along your body as you spin in a pool. General relativity predicts that this effect would manifest itself as extra precession, or the rotating of the orbit’s axis—imagine both stars were on the sides of a spinning top, and the top beginning to wobble; that’s precession.

Based on observations of the arrival time of the pulsar signal, the orientation of the orbit, and how the orbit varied, the researchers determined that the precession matched what would be expected if there was a contribution from the white dwarf dragging space-time along with it. The white dwarf has to be spinning very fast, once per 200 seconds or less, according to the paper published in Science.

The paper’s authors wrote in an article for The Conversation that such a system might have formed from a pair of stars that died. The first, more massive star would have become the white dwarf and begun sucking mass from the second star, creating a disk and eventually bestowing it with a quick spin. The second star eventually exploded as a supernova, leaving behind the pulsar the researchers used to perform this measurement.

Tests of Einstein’s theory of general relativity have become one of the core ways physicists try to probe our universe. Plenty of huge questions remain outstanding, such as the true identities of dark matter and dark energy. Gaps in the theory might reveal an avenue for further research to answer these questions. While scientists have found evidence of this frame dragging before in satellites orbiting Earth, this extreme system offered an extreme test of the theory—and once again, general relativity refused to budge.

Having Cold Could Protect You from Coronavirus: Scientists

Only 10% of Coronavirus Patients Develop Antibodies: WHO Adviser

Having Cold Could Protect You from Coronavirus: Scientists