Zarif: Israeli Crimes Must Be Designated as Genocide

TEHRAN (Tasnim) – Iranian Foreign Minister Mohammad Javad Zarif called for the formation of a professional international watchdog to monitor and report on the crimes against Palestinians, stressing that the Organization of Islamic Cooperation must recognize the Israeli criminal acts as genocide.

Zarif, who is in Italy, took part in an online emergency meeting of the OIC, held to discuss the latest developments in Palestine and a surge in the Zionist regime’s atrocities against Palestinians in Jerusalem al-Quds and Gaza.

In his address, delivered from the Embassy of Iran in Rome, the top Iranian diplomat said the OIC members should extend the jurisdiction of their national tribunals to include the prosecution of criminals perpetrating war crimes, genocide and crimes against humanity in the Palestinian occupied territories. 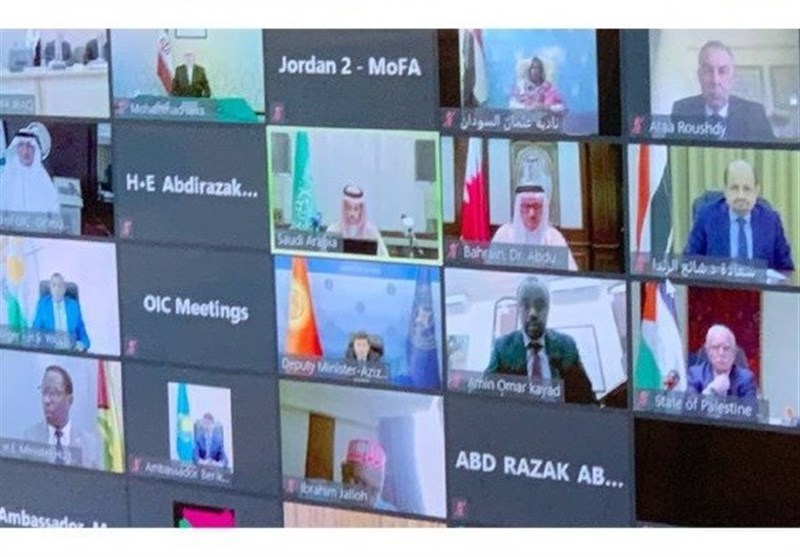 What follows is the full text of his speech:

Allow me to begin by thanking you for organizing this timely meeting as we witness the most heinous crimes being perpetrated against our brothers and sisters by Zionist forces in occupied Palestine.

Innocent men, women and children are being massacred by the deadliest and most sophisticated weapons. Homes are being demolished while their residents are trapped inside. Whatever remains of the infrastructure in Gaza—including power and water supply—is effectively destroyed.

We are facing blatant and systematic violations of human rights, humanitarian law and international law.

The massacre of Palestinian children today follows the purported “normalization.” This criminal and genocidal regime has once again proven that friendly gestures only aggravate its atrocities. The sole aim of Israel’s hypocritical gestures is to divide Muslims and isolate the people of Palestine. Make no mistake: Israel only understands the language of resistance and the people of Palestine are fully entitled to the right to defend themselves and to defy the bullying of this racist regime.

These barbaric acts have proven once again that the only peaceful path to peace in Palestine is the holding of a referendum among all residents of Palestine, including displaced Palestinians and refugees.

It must not be forgotten that Palestine is not only an Arab or Islamic issue, but also an international dilemma. The crimes committed against the innocent Palestinian people over decades weigh heavy on the conscience of humanity. The international community therefore has a duty to condemn the Israeli regime in the strongest terms and compel it to end the destruction and siege of Gaza.

We should continue to work actively in the United Nations to urgently convene an emergency session of the General Assembly to address this issue.

Moreover, the abhorrent approach of some Western governments in equating victims and culprits compels us to look at our shortcomings in pressing our common cause.

We should devise an "institutionalized" legal and political campaign against this apartheid Zionist regime at regional and international levels.

A professional international watchdog should be established to monitor and report on the crimes perpetrated against Palestinian people. These crimes must be documented and reported with the aim of bringing culprits to justice.

We should also pass domestic legislation and a resolution by this organization recognizing that Israel is an apartheid regime.

Furthermore, the criminal acts of Israel should be recognized as genocide and crimes against humanity by both domestic legislation and OIC resolutions.

And, member-states should extend the jurisdiction of their national tribunals to include the prosecution of criminals perpetrating war crimes, genocide and crimes against humanity in the Palestinian occupied territories.

The Islamic Republic of Iran, as always, extends its hand of friendship to all of you. We are prepared to set aside all differences and unite in defending the rights of the people of Palestine by resorting to every legitimate political and legal tool.

Iran Capable of Carrying Out Any Drone Operation: Commander