TEHRAN (Tasnim) – Praising Iran as a “key partner” for Syria, the Arab country’s president said that the two nations will continue combating terrorism until the ultimate defeat of terrorist organizations.

Iran is a key partner for Syria and has stood by the Syrian people in the face of the terrorist war and provided them with support in all fields, Bashar al-Assad said in a meeting with visiting Iranian Parliament Speaker Mohammad Baqer Qalibaf and his accompanying delegation in Damascus on Wednesday, Syria’s official news agency (SANA) reported.

The Syrian leader pointed out that the coordination between the two countries in combating terrorism has brought about positive results on the ground and will continue until the liberation of all lands and the defeat of terrorist organizations.

For his part, Qalibaf said the recent elections in Syria and Iran and the will of the Syrian and Iranian people in determining their future prove the failure of the pressure policies that are being exerted against them, and stressed that no one can stand in the way of the two nations’ will.

During their meeting, the Syrian leader and Iran’s top parliamentarian also discussed close, bilateral relations between the two countries and their constructive cooperation at various levels. 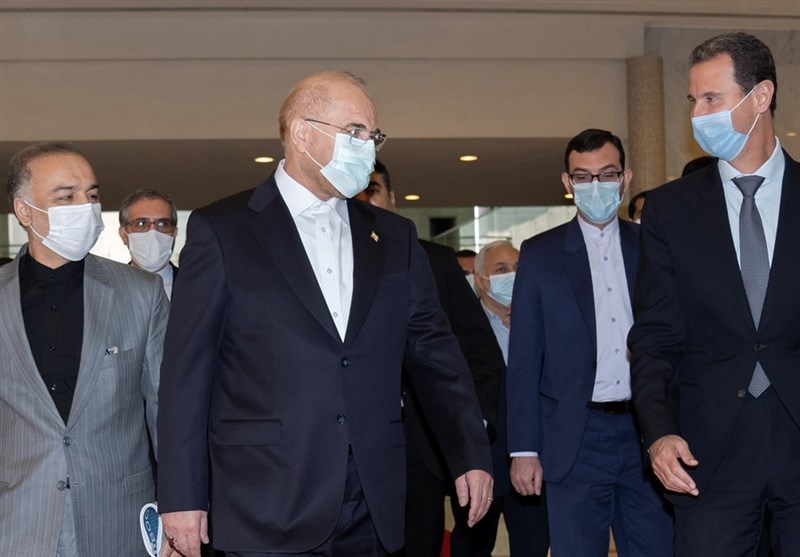 The two sides stressed the essential role played by the Iranian and Syrian Parliaments to open new horizons for bilateral ties, particularly in the economic field by activating cooperation between the private sector of both countries in a way that would help the two friendly nations confront the economic war and the policy of blockade and sanctions imposed on them.

Heading a parliamentary delegation, Qalibaf arrived at the Syrian capital on Tuesday for an official visit for high-level talks on various issues, including economic cooperation between Tehran and Damascus.

Speaking to reporters upon arrival in Damascus, Qalibaf said that a comprehensive joint cooperation agreement was being devised by Iran and Syria and that it would be approved by their respective legislative bodies in due course.

Back in May, Iranian Foreign Minister Mohammad Javad Zarif also paid a visit to Damascus in the run-up to Syria’s presidential election, during which he discussed the promotion of bilateral relations, especially cooperation in the economic and cultural fields with the Syrian leader.

Zarif also voiced the Islamic Republic of Iran’s support for the elections in Syria and briefed the Syrian president on the Vienna talks aimed at reviving the 2015 Iran nuclear deal, as well as Iran’s measures in connection with the latest regional developments.

During the meeting, President Assad praised the Islamic Republic's support for Syria in the fight against the terrorist group of Daesh.

Iran has been providing Syria with military advisory support in its fight against terrorist groups waging foreign-backed war against the Arab country upon a request from Damascus.