TEHRAN (Tasnim) – Martyrs are the big winners of the best deal in the world, the deal with Allah, Leader of the Islamic Revolution Ayatollah Seyed Ali Khamenei said.

Ayatollah Khamenei met with the officials in charge of the Martyrs of Zanjan Commemoration Ceremony and a number of the families of martyrs on October 16.

In the gathering, the Leader made some statements that were published on October 28 at the Commemoration Ceremony in Zanjan.

The following is the full text of the speech, released by Khamanei.ir:

“In the Name of God, the Beneficent, the Merciful

Praise be to God, Lord of the Worlds, and peace and greetings upon our Master Muhammad, and upon his pure Household, especially the remnant of God on earth.

First of all, I wish to welcome all of you dear brothers and sisters, especially the members of the families of martyrs who are here today—the honorable mother of three martyrs and all those involved in conducting this important commemoration ceremony. I truly thank all of you for starting and doing this valuable work. God willing, you will continue and complete it. Please send my sincere regards to the friends who have sent their greetings, including the youth and members of religious gatherings.

The position and role of Zanjan in the history of Iran

The city of Zanjan has achieved many accomplishments. Throughout history, Zanjan has earned many honors, both in scholarly areas and in action. These accomplishments have been achieved in the religious sciences – jurisprudence, philosophy and mysticism–and in social fields. There have been outstanding personalities with different orientations, but all of them have worked for and in the way of God. There have been personalities such as Akhund Mullah Qurban-Ali and the like. Zanjan is truly an outstanding, exemplary city. Regarding the new sciences, our well-known martyr in Nuclear Sciences, Martyr Shahriari, was one of the honorable sons of the city of Zanjan. Therefore, Zanjan has accomplished many feats. The martyrs from this area too are at the top of the list of achievements registered by Zanjan. I will mention a few points about the martyrs and then I will discuss your work, the move to commemorate martyrs.

The position and value of martyrs

As for martyrs, martyrs are chosen ones, chosen by God, the Exalted. Martyrs have chosen the right path, and God chose them to reach the destination. The value of martyrs cannot be measured with our material calculations. The martyrs have won in the best deal in the world, “Oh you who have faith! Shall I show you a deal that will deliver you from a painful punishment? Have faith in Allah and His Apostle, and wage jihad in the way of Allah with your possessions and your persons,” (Holy Quran, 61:10-11) and it continues to the end. The big winners in this deal are our martyrs, “Indeed Allah has bought from the faithful their souls and their possessions for paradise to be theirs.” (Holy Quran, 9: 111) What is better than this deal? 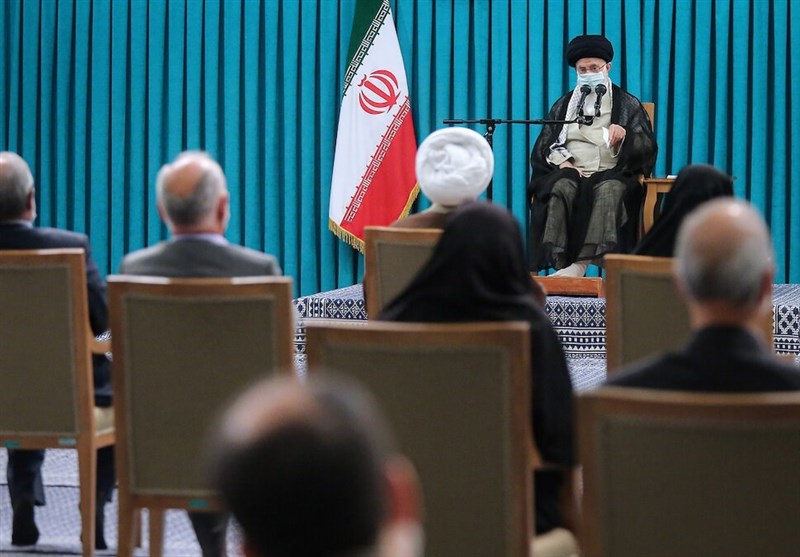 Martyrdom is the peak of glory

There is a point here that we should all pay attention to. The point is that martyrdom is a peak, and a peak is not meaningful without a hillside. Each peak has a hillside. Many of us wish to reach that peak, but we have to pass along the hillside. We have to find the path on the hillside and tread the path to reach the peak. Otherwise, it is not possible to reach the peak without passing over the hillside. What is this path and this route? It is sincerity, self-sacrifice, truth, spirituality, diligence, forgiveness, attention to God, working for the people, struggling for justice, and working to establish the rule of religion. This is what determines the path, and if you travel this path, you may reach the peak. The one who reaches the peak must start from here and move along these paths. Spirituality should not be forgotten.

I read somewhere that Martyr Shahriari worked late one night on a complex scientific problem but could not solve it. His student related in a book, “The martyr worked a great deal. When he was unable to solve this problem, he said,  ‘Let's go to the university mosque.’ I think it was in Shahid Beheshti University. We went inside the mosque and performed a two cycle prayer with feeling and attention. After the prayer he said, ‘I understand now. God, the Exalted, showed me the solution.’ He got up and left, and he solved the problem.” This is spirituality. This is the way of God. When one makes this move and treads this path, it becomes possible to reach the peak. It becomes easy. I am not saying that it will definitely be done, but it becomes feasible. Without moving in this direction, it is not possible to reach the peak.

The importance of holding commemoration ceremonies for the martyrs

As for you organizers of this commemoration ceremony, first of all you should know that this is a great deed. What is being done is a great deed. This commemoration of the martyrs and the work that is being done surrounding this issue should not be considered a normal, everyday deed. No, this is indeed a great deed that you are doing. Of course, it is a task that is not over. As this dear brother of ours said, it is not such that having held a number of commemoration ceremonies in some cities, counties and provinces, the issue is over. It has just begun. Despite the passage of years since the time of the Sacred Defense, the job of commemorating martyrs has just begun. And it will and should continue. 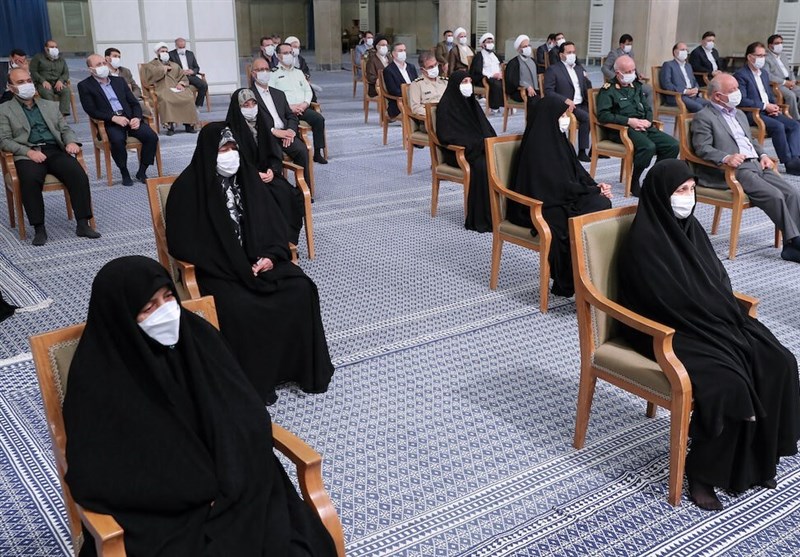 The need to be innovative in commemoration ceremonies

You should come up with new ideas. Of course, the things the friends in the meeting mentioned are all among the best ideas. Writing books, making films, and services that are rendered in the memory of martyrs are all good things. On my way here, I saw the books and posters that you have prepared. They were good. Of course, I did not read the books, but the titles were good and correct.

The need to reflect the martyrs’ view of religion

In addition to these tasks, other tasks must be carried out as well including making sociological and psychological analyses and inferences based on these memoirs and based on a powerful element, namely religion. This is a very important element. Why do some people want to ignore this? I read in the report of some friends that a number of our martyrs were the only sons in their families. What does it mean when a mother and father are ready to send their only son to a field where he may not return? Does this come from anything other than one’s focus on religion, divine satisfaction, divine reward, and religious duty? The young martyrs themselves, who made such brave moves and who embraced danger by risking their own lives, were religiously motivated. The presence of this powerful element should be analyzed from the country’s sociological stance and from the people of the country’s psychological point of view. Experts should work on these.

Other things they should also work on include those aspects of martyrs’ lives which existed on the periphery of their sacrifice. This includes things such as their parents’ biographies. This is a very important point. How did their fathers feel and what motivated them? They should also study the behavior of their spouses. How can a spouse let her beloved husband, with whom she was leading a comfortable life, go. How can she tolerate his absence and after that his martyrdom? Their feelings and emotions are worthy of analysis.

There are also other services that are provided by the people. One of the things that I cannot claim with certainty now, but I believe can be said is one of the characteristics that is unique to our country and the war we fought, is the services that have been carried out in homes, in women’s centers, in public places, and the like. For example, they cooked food in houses, canned fruits, provided food supplies, baked bread and sent these to the frontlines. These are astonishing things. With what motivation and with what determination did these men and women do these actions? I recently read a book called “A Pool of Blood.” Although, I saw it in Ahvaz. I saw myself the places where people would wash the bloody clothes of the soldiers and the bloody sheets of the soldiers in the hospitals. These things have been written about in detail in this book. One is truly surprised. One feels embarrassed when one sees all the services these women carried out over these years and what hardships they endured. These are subjects that can be worked on.

The need to study the funeral ceremonies held for martyrs

You can also address martyr’s funeral ceremonies. One of the subjects that has been neglected, not been paid attention to so far and should receive more attention is the funeral ceremonies of the martyrs during the war and at the present time. At the present time too, when they bring the bones of a martyr into a city, a magnificent funeral ceremony is held! Every few days during the war, in different cities - in Zanjan and elsewhere - huge funerals were held, people would come, poets would compose poems and elegies, and people would beat their chests in memory of martyrs. This is unprecedented in the whole word. These are astonishing, memorable events that should be recorded and preserved.

Naming streets and roads after martyrs

Another issue is the naming of streets and roads in cities. Cities should be decorated with the names and memories of martyrs. The City Councils in different cities should know the names of the people the city is proud of. What honor is higher for a city, for a street, for a road and an alley, than that the name of a great martyr, the name of a man of sacrifice, be put on it? These are things to follow up on. You should follow up on these issues. You have taken the first step, which is the accomplishment of these tasks and the formation of such commemoration ceremonies, and you should continue following up on these matters.

God, the Exalted, will bestow the blessings brought by martyrs on our nation, God willing. May He raise their pure souls with that of the Holy Prophet. God willing they will soon see the results of their endeavors, which is the victory of the Iranian nation. Fortunately, the Iranian nation has always moved forward toward victory over these years. God willing, the economic problems will be resolved as well. The problems that exist today in livelihood, the economic situation and such things will be eliminated, God willing, with the determination of the officials and the endeavors of people such as you. May God reward you with His grace and raise our magnanimous Imam, who showed us this path, with the Holy Prophet. May the pure souls of the martyrs be satisfied with us.

Greetings be upon you and God’s mercy and blessings"