TEHRAN (Tasnim) – Rainbow auroras, giant storms and far-off galaxies are all on display in the latest images of Jupiter from NASA's James Webb Space Telescope.

"We hadn't really expected it to be this good, to be honest," said planetary astronomer Imke de Pater, professor emerita at the University of California, Berkeley, in a news release.

De Pater and Thierry Fouchet, a professor at the Paris Observatory, led observations of the largest planet in our solar system using the Webb telescope -- which is itself an international endeavor by NASA with the European Space Agency and Canadian Space Agency, NASA said.

Painting a picture that moves from orange and yellow at Jupiter's poles to blues and purples toward the center, several images from the telescope came together to form an overall composite and give Earth a look at the gas giant.

You can also see faint rings and far off galaxies "photobombing" in the background, according to NASA.

Scientists collaborated with citizen scientist Judy Schmidt to translate data to form the composite images from the telescope, which help give a better look into Jupiter's life, NASA said.

Jupiter is hard to translate into images because of how quickly it rotates, said Schmidt, who's based in Modesto, California. 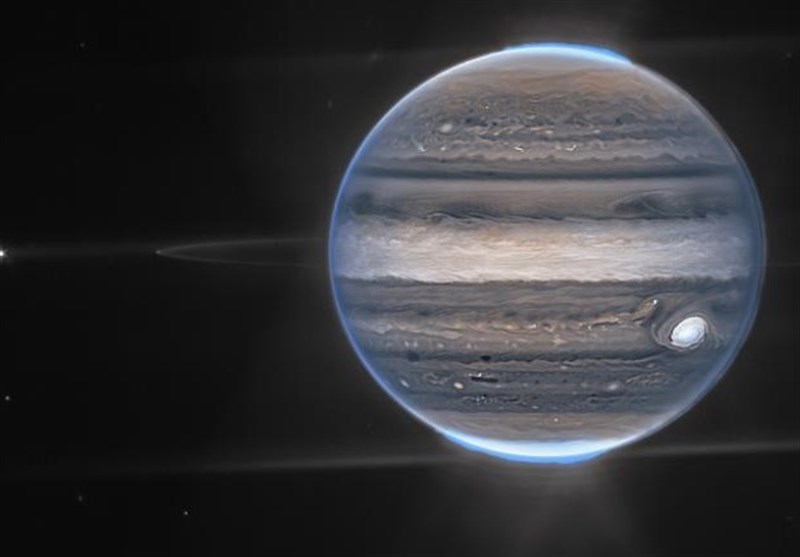 "This one image sums up the science of our Jupiter system program, which studies the dynamics and chemistry of Jupiter itself, its rings, and its satellite system," Fouchet said.

But Jupiter isn't Webb's only subject. The space telescope is using infrared light to reveal otherwise invisible aspects of the universe.

Development of the world's premier space observatory began in 2004, and after years of delays, the telescope and its massive gold mirror finally launched on December 25, 2021.

The telescope will look at every phase of cosmic history, including the first glows after the big bang that created our universe and the formation of the galaxies, stars and planets that fill it today.

The telescope is also discovering and observing exoplanetary systems, which each consists of a planet outside of our solar system and its host star.

Some of these exoplanets are potentially habitable, and peering into their atmosphere could uncover clues in the ongoing search for life outside of Earth.