TEHRAN (Tasnim) – Muslim nations are expected to show a massive participation in rallies to mark the International Quds Day after the recent developments in Egypt and region, specially the US efforts to revive the so called peace talks between the Zionist regime of Israel and Palestinian Authority.

The International Quds Day is an annual event during which demonstrators express their solidarity with the Palestinian people and opposition to Zionism as well as Israel's control of al-Aqsa mosque.

Imam Khomeini declared the last Friday of the holy month of Ramadan as the International Quds Day, and called on Muslims and freedom-loving people all over the world to mark the occasion with massive rallies.

The rallies will be held at the time that the US has started new efforts to revive the so called Middle East peace talks amid the latest political chaos in Egypt in which scores of people have been killed in almost daily clashes between supporters of the deposed President Mohamed Mursi, his opponents, and the country’s security forces since July 3, when army chief General Abdel Fattah al-Sisi announced that President Mohamed Mursi was no longer in office.

On Tuesday, US Secretary of State John Kerry announced that Israeli and Palestinian negotiators have agreed to meet within two weeks to start substantive negotiations on a so-far elusive peace deal with the goal of reaching a deal within nine months.

Kerry made the remark as the two sides wrapped up an initial two days of talks at the US State Department after paying a visit to President Barack Obama at the White House. 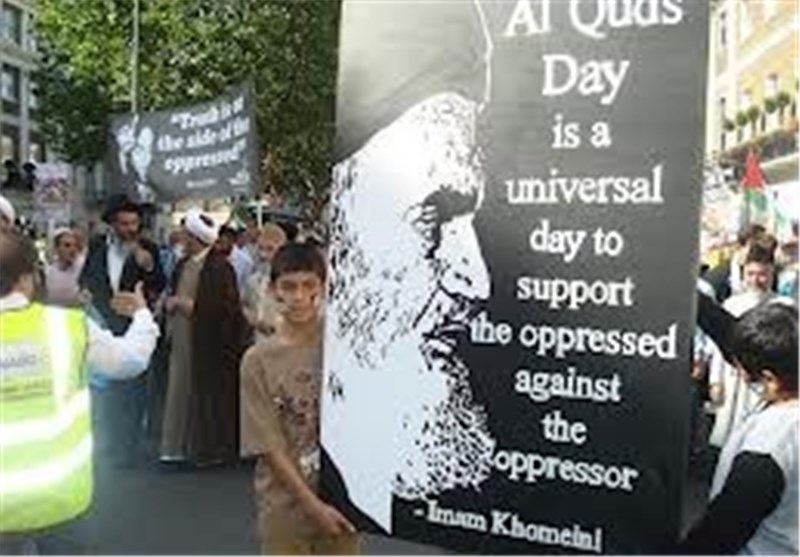 Meantime, prominent analysts and political observers say that Palestinian-Israeli compromise talks (so-called peace talks) have always been quite fruitless and doomed to failure.

“The compromise talks have borne no fruit ever since they started in 1979 in Camp David, leading eventually to the Oslo Agreement, and pursued during (the former US president Bill) Clinton in proposals such as the Annapolis plan,” Head of the Iranian Foreign Ministry’s First Middle East Office, Mojtaba Ferdowsipur, told Tasnim on Tuesday.

In relevant remarks, Chairman of the Iranian Assembly of Experts Ayatollah Mohammad Reza Mahdavi Kani dismissed attempts to launch the so-called peace talks as a desperate attempt to draw attention away from Israel's crimes.

“On this year’s International Quds Day, Muslims will condemn such desperate attempts, and will not allow anyone to betray (the Muslim world) and erase more than half a century of the Zionist regime’s atrocities,” the senior cleric said in a statement.

In similar stance on the latest developments in Egypt and the Palestinian-Israeli conflict, a senior Palestinian figure expressed doubt about the Zionist regime of Israel’s honesty in the so-called peace talks, and said the ongoing conditions in Syria and Egypt will be in the interests of Israel.

“We call on all Egyptian and Syrian sides to come to the table of negotiation for resolving their countries’ crises," Representative of the Palestinian Islamic Jihad Movement in Iran Nasser Abu Sharif said, adding,"... these conditions will only serve interests of the occupying Zionist regime.”

Addressing reporters in a press conference on the verge of the International Quds Day here in Tehran, Abu Sharif also noted that the purpose of the Palestinian nation's fighting against Israel is to “free the entire territories and the Islamic Ummah (community) from (Zionist) plots”.

US Reasoning for Return of Iran Sanctions ‘Funny’: Lavrov

No Foreign Pilgrim Allowed Entry into Iraq for Arbaeen: Envoy

US Has No Legal Right to Reinstate Iran Sanctions: Germany