TEHRAN (Tasnim) – Since the CubeSat specification was developed in 1999 by Stanford and California Polytechnic, low-cost satellites have become a reality for academic institutions and companies around the world.

Their standardized dimensions and off-the-shelf components make for simpler design and production, but there's a problem: these 10-centimeter cubes, used widely in fields such as meteorology, communications, and aeronautics, are limited by Earth's orbit.

Now, a team of researchers wants to change that — making interplanetary exploration more affordable by crowdfunding the development of a novel thruster that uses water as its propellant.

Their CubeSat Ambipolar Thruster, or CAT, works in a similar way to existing rocket thrusters — by heating up a propellant and expelling it through a nozzle. In this case, however, the CAT will heat its propellant "to millions of degrees instead of thousands of degrees," says project leader Ben Longmier from the University of Michigan.

That heat turns it into plasma, which is then guided with a magnetic nozzle to where it needs to be. "This extremely high temperature," Longmier says, "allows for the high efficiency of the engine." That efficiency, combined with its small size and simple components, also makes it very cheap.
Leaving Safety of Earth's Orbit Has Been an Expensive Task

That's important because leaving the safety of Earth's orbit has traditionally been an expensive task. India's recent mission to Mars, widely referred to as "low-budget," cost the country $72 million. NASA's Mars Observer cost 10 times as much when it launched in 1992.

Longmier and his team are seeking just $50,000 to develop their thruster, which can then be attached to a regular CubeSat to send it far beyond Earth's orbit. "It would usher in a whole new capability for small satellites," Longmier says.

There are hundreds of potential uses for the technology. A fleet of satellites observing the atmospheres of other planets could be as dense as those tracking Earth's. Scientists could gather far more data on solar flares, making space weather more predictable. A proliferation of CubeSats would also help identify and tag objects in the asteroid belt for mining or exploration, not to mention the search for life on the watery moons of Saturn and Jupiter or even the creation of an interplanetary internet.

Space Is a Risky Business.

However, there are plenty of things that could go wrong between then and now. "Space is a risky business," Longmier acknowledges. "Things will break. We are pursuing this model of research and development and using space as our new laboratory. In the lab, things break and arc and melt. It's easy to fix and you're off running again. In space, if it breaks it’s likely dead." 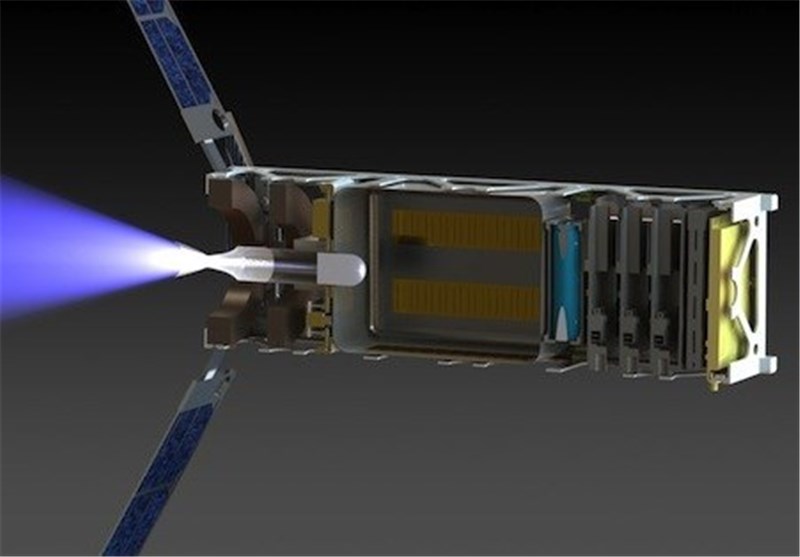 This isn't so much of a problem with the CAT thruster as with a billion-dollar craft, as another model can be launched at low cost. But running out of funding before the engine becomes operational is a real risk, Longmier says. That's why the team has taken to Kickstarter to raise funds for its endeavor.

A first attempt at raising $200,000 for the project failed this past August, managing to gather just $68,000 before the deadline. Now, the team has launched a second crowdfunding drive with a lower target of $50,000 that'll allow — with the help of some private investors — for the creation of a minimum viable thruster. The idea is to get the project moving, and then worry about the rest of the funding later.

Of course, if the team surpasses that figure, this preliminary thruster can become more advanced. Raising $80,000 means increased efficiency of the nozzle, while $500,000 will allow the team to increase the throttle range. And if funding reaches $1,750,000, topping the funding gathered for the Arkyd Space Telescope, then the team will send CAT into deep space, allowing backers to vote on its destination.

""We should be developing space technologies with ambitious goals.""

These goals may sound ambitious, but Sara Seager, a professor of Planetary Science and Physics at MIT, applauds the team for its ambition. "As a society we should be developing space technologies with ambitious goals," says Seager, who isn't involved in the project. "This is a highly credible team and a sound concept. By giving interplanetary capability to small satellites, they'll open up interplanetary space to a wide variety of people [including] traditionally non-space-faring nations."

"Getting a plasma thruster small enough to propel a CubeSat would be very useful," adds Lucy Rogers, project coordinator at the British Interplanetary Society and the author of It's Only Rocket Science. Rogers was surprised by the choice of water as propellant, however.

"Xenon, the heavy inert gas which is the industry standard for electric propulsion, is 1.7 times more dense than water," she says. "It takes up less volume for the same amount of oomph. Also, water freezes below zero, so the tank will have to be kept warm."

We Could Refuel at Asteroids or Depots

Longmier plans to start out with xenon, using it to benchmark the thruster's performance. He says it'll take around $300,000 in funding to complete the development of a water-propellant system.

"Water is everywhere in the solar system," he says in defense of the tactic. "Long term, we could refuel at asteroids or depots. Short term, water is easy to store and launch. We can even have astronauts launch our little engines from the ISS without any safety concerns."

For their support, backers of the Kickstarter drive can secure anything from a silk bow-tie to having their name laser-etched onto one of the spacecraft.

Pledge $10,000 and the team will fly you from anywhere in the US to press the button that triggers the first firing of the thruster in space. "With this technology, we can explore deep space and other planets faster and cheaper than ever before," Longmier says.

"First, we would like to make space exploration affordable and sustainable. And second, we'd like to open it up to the community and have people be a part of the process."

Scientists Calculate How Longer You Can Live with Healthy Lifestyle