TEHRAN (Tasnim) – NASA has announced that liquid saltwater exists on the surface of Mars - a discovery that scientists say indicates the "potential" for life on the planet.

The historic findings by scientists from NASA and several US universities are based on research on dark, narrow and elongated streaks that appear on the surface of the Red Planet and which are known as "recurring slope lineae" (RSL).

Research shows the streaks "appear and grow incrementally in the downslope direction during warm seasons".

NASA scientists suggest the streaks were formed as a result of salty "flows" or "seeps" because they bear a striking resemblance to the shapes and curves that water on Earth makes as it flows along the surface of the ground.

The theory that water exists on Mars was first proposed by scientist Lujendra Ojha, who as an undergraduate student at the University of Arizona in 2011, studied dark, finger-shaped images on Mars, Al Jazeera reported on Monday.

Ojha, now a PhD candidate at the Georgia Institute of Technology and the lead author of the study, told Al Jazeera that "water does exist on Mars". 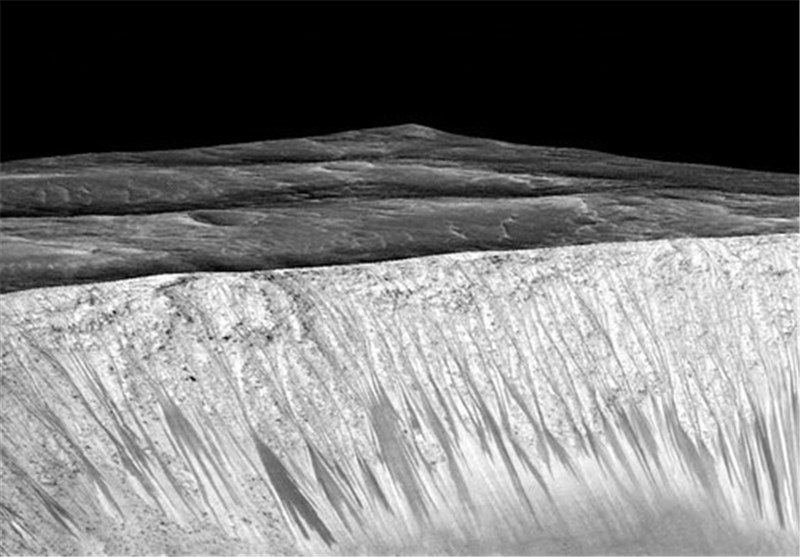 Ojha added that chemical signatures of water were found in the crystals of salt samples.

"We found evidence of water activity in hydrated salts on Mars," he said.

The authors of the research paper - "Spectral Evidence for Hydrated Salts in Recurring Slope Linea on Mars" - published in the scientific journal Nature Geoscience identified four key hydrated salts that indicated the presence of water: magnesium perchlorate, magnesium, chlorate, and sodium perchlorate as present in the dark streaks.

"Our findings strongly support the hypothesis that recurring slope lineae form as a result of contemporary water activity on Mars," the paper, which will be the topic of NASA's announcement, said.

'Finding water is step one'

Alfred McEwen - planetary geology professor at the University of Arizona, who co-authored the paper - had previously done extensive research on ravines to see if water existed on the dry and frigid planet .

"Water [in a liquid state] is essential to life as we know it, so finding water is a big step. On Earth, anywhere there's water in nature, there is life, but that isn't necessarily true on the surface of Mars," McEwen told Al Jazeera when asked what the discovery meant for the possibility of life on Mars.

"The water may be such a dense brine that life can't flourish, and the radiation environment of Mars' surface is detrimental. However, finding the water is step one, and we need future investigations to look for life at these locations."

Science fiction enthusiasts and Hollywood executives may be disappointed to learn there will be no alien creatures, or even large organisms, as far as science is concerned.

Life on Mars, if it exists, will most likely be microbes, McEwen said. 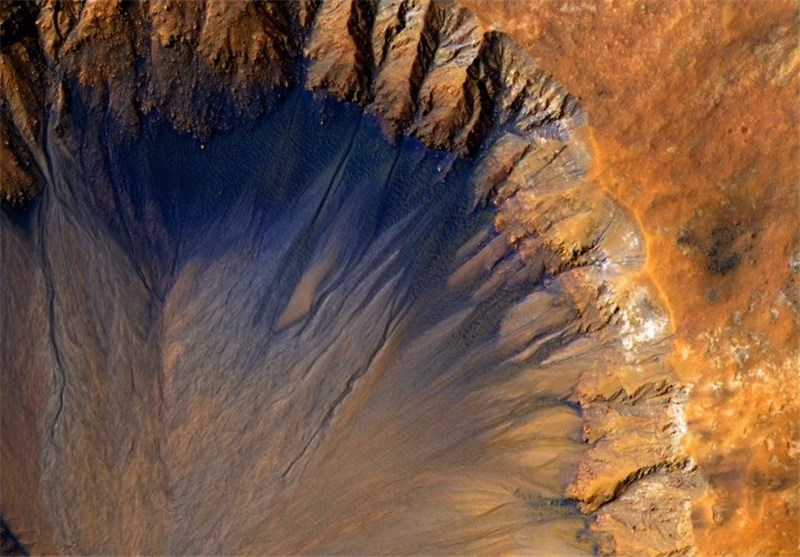 Crater in the Sirenum Fossae region of Mars. Photograph: EPA/NASA/JPL/University of Arizona

The dark streaks were originally seen by NASA's Mars Reconnaissance Orbiter travelling at low and middle latitudes in the southern hemisphere, but as temperatures spiked during summer months, the streaks appeared to be seeping downslope and faded in cold seasons. They appeared again and in the same spot year after year.

Observing this, scientists reasoned that, since Mars is about 80.5 million km further from the sun than Earth and its surface temperature rarely rises above freezing point, it was the rise in temperature during summer months that triggered the shapes to appear again.

Scientists say this suggests that trapped ice inside salty particles melted and flowed down the steep slopes of Mars, creating the dark river-shaped streaks on the surface.

"These results strongly support the hypothesis that seasonal warm slops are forming liquid water on contemporary Mars," the paper said.

"If water on Mars proves to be real, it would not look or feel like water on Earth. Mars water would most likely be 'briny rather than pure' not free flowing."

"This is a wet soil, not standing water," McEwen said.

US Astronaut Developing A Plan to Colonize Mars within 25 Years

Ancient Mars Had Massive Lake, Was Potentially A Wet Planet

US Astronaut Developing A Plan to Colonize Mars within 25 Years

Ancient Mars Had Massive Lake, Was Potentially A Wet Planet

Biden Says US to Never Recognize Russia's Claims on Ukraine

Death Toll from Shipwreck in Bangladesh Rises to 69, Another 3 Missing, Reports Say