TEHRAN (Tasnim) – Iranian Foreign Minister Mohammad Javad Zarif condemned a series of recent terrorist attacks in Turkey, Bangladesh, and Iraq, which claimed the lives of tens of people, stressing that the Islamic Republic will not “rest” until all terrorists are eliminated.

“We should not and will not rest until those behind terror in Istanbul, Dhaka, and now Baghdad, and their ideology, are defeated,” Zarif made the statement in a message posted on his Twitter account late on Sunday. 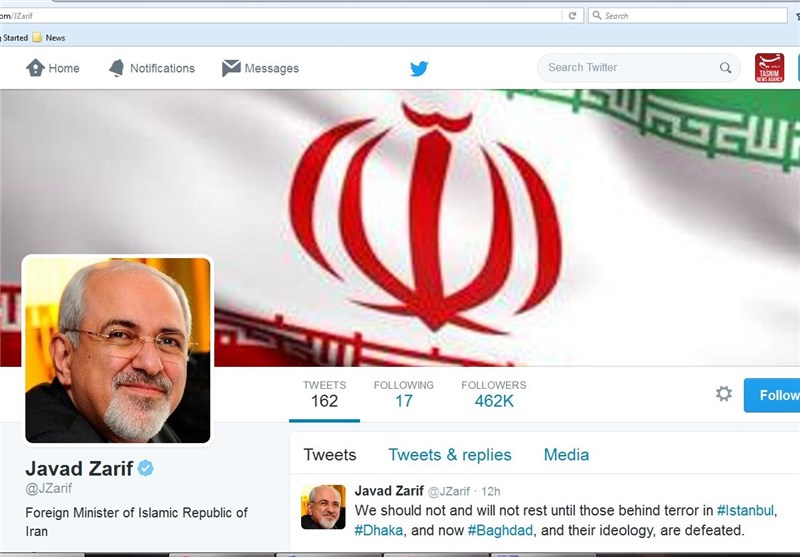 The Iranian top diplomat’s message came after at least 167 people lost their lives and 185 others sustained serious injuries in a twin attack in Baghdad early on Sunday.

The first attack occurred at about 1 a.m. local time (2200 GMT Saturday) when a bomber detonated his refrigerator truck packed with explosives in the capital’s south-central neighborhood of Karrada.

Another similar terror attack hit Istanbul's Ataturk international airport on Tuesday night and killed 36 people and injured more than 140 others.

Deputy FM: Iran Has No Intention of Starting Talks with Biden Admin

Zarif: Window of Opportunity for New US Administration Will Not be Open Forever

Deputy FM: Iran Has No Intention of Starting Talks with Biden Admin