TEHRAN (Tasnim) - Riot police used water cannon and sonic alarms to repel hundreds of protesters shouting anti-Donald Trump slogans on the sidelines of a major summit in Manila on Monday.

Colorful effigies of the US president, including one with four arms in the shape of a Nazi swastika, were carried through the streets of the Philippine capital, AFP reported.

A likeness of Philippine President Rodrigo Duterte peeked out from behind the figure, as the two leaders readied to sit down for formal talks less than 3km away.

Police said there were nearly 2,000 people at the rallies.

They were met with riot police – some wearing flak jackets and carrying rifles – who fired water cannon and sounded high-pitched alarms.

At least six police officers were injured in the melee, an AFP reporter at the scene said.

"They hit us with wooden sticks. One of my colleagues was hit in the face by a rock," police officer Ramon Dumagat said, his arms covered in reddish welts.

Rights groups have called on Trump to speak out over Duterte's drugs war, which has seen police and suspected vigilantes kill thousands of people during his 16 months in power. 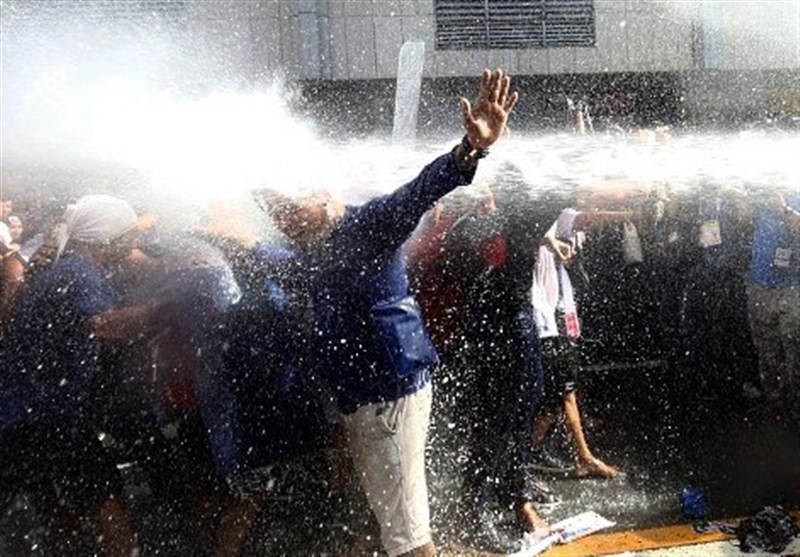 But the one-time property magnate, who is on the final stop of a tour of Asia, has so far shown nothing but warmth for a strongman leader who has boasted of personally killing people.

Satur Ocampo, a former communist rebel leader and ex-congressman who was among the demonstrators, told AFP he had little hope Trump would raise a drug war that critics say could amount to a crime against humanity.

"They think alike," he told AFP.

"He let Trump sit beside him at (Sunday evening's) banquet, gave him a place of honor."

The Association of Southeast Asian Nations is hosting two separate events on Monday and Tuesday in Manila.

They also include China, Japan, Russia, South Korea, India, Canada, Australia and New Zealand, as well as the United States.

The rising threat of the Daesh (also known as ISIL or ISIS) group across Southeast Asia, and efforts to pressure North Korean leader Kim Jong-Un to abandon his nuclear ambitions, are top agenda items.

US Accusations of ‘Non-Transparent’ Elections in Russia Are Ungrounded: Embassy