The Epitome of Freedom, Humanity And Love

TEHRAN (Tasnim) – As my American friends, the group Hip Hop Detoxx say, sometimes you just have to hit the reset button and that is true for the world today that needs a reset button in order to get back to normal.

In the absence of such a reset button, the alternative is to attend the Arbaeen March from Najaf to Karbala in Iraq a march that exemplifies how freedom, humanity, and love co-exist in every man, woman, and child regardless of their religion, caste, creed or denomination.

You have never witnessed such unmatched generosity, love with no bounds and faith with no limits, for one revered man who gave his life to keep Islam alive. His name, Hussain Ibn Ali the son of Ali Ibn Abu Talib, the first Shia Imam and second grandson of Prophet Muhammed (PBUH).

Marching from Najaf on foot toward Karbala is usually done on the days leading to Arbaeen or 40th day of Imam Hussain’s martyrdom. This is an unmatched and unprecedented gathering of human beings in the history of mankind which in recent years has grown to 8 times the size of the annual pilgrimage of Hajj in Mecca, Saudi Arabia.

Iraq, a country that lacks many basic security standards and living conditions and specifically the holy cities of Najaf and Karbala which have a capacity of less than half a million at best, play host to more than 20 million pilgrims who cover the roads leading to Karbala. This in itself is nothing short of impossible and when one actually witnesses this magnanimity one starts believing in modern day miracles. 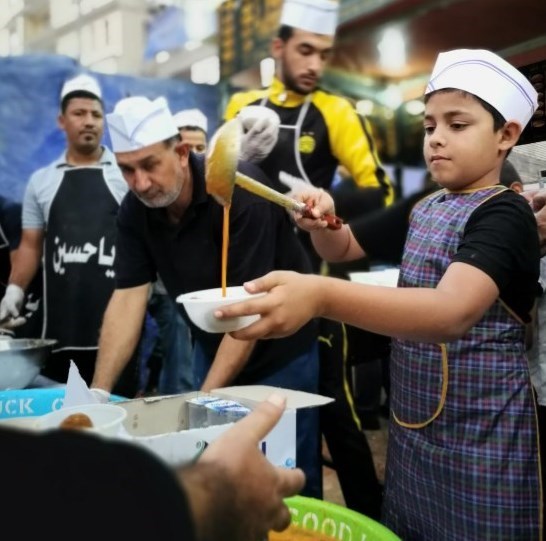 Fresh soup being served at one of the thousands of stations set up to serve the passing 20 million+ Arbaeen pilgrims.

The western media boycott this epic. This is while the so-called mainstream media in the west stir immense worldwide blitz if a single Zionist somewhere on the planet earth gets a stomach ache.

14 centuries have passed since the very first pilgrim of Arbaeen Jaber ibn Abdullah Ansari traveled to Karbala on foot and reached Imam Hussein’s tomb on the 40th day of his martyrdom. Ever since this tradition has been carried out although at times it has been very dangerous and pilgrims would lose their lives or be mutilated. However, this has never stopped the faithful from making the journey. A quote by Iran’s supreme leader Ayatollah Khamenei perfectly fits the occasion

“The start of the Husseini magnet is on the day of Arbaeen. It raises Jaber ibn Abdullah from Medina and takes him to Karbala. This is the very magnet that exists in my and your heart after the lapse of consecutive centuries.”

What do you say about Hussain ibn Ali, I don’t think there are enough words to describe his sacrifices. The second son of Fatima and Ali Ibn Abu Talib, Hussain was born on 3rd Shabaan, 4th year of Hijri (626 AD).

When he was born the Holy Prophet (SAW) was given the news of the birth of his 2nd grandson. He arrived at his daughter’s house, took the little baby in his arms, and recited the Azan and Iqamah (the first and the final calls of prayer) in his ears. People around the Prophet saw tears in his eyes.

His daughter asked him what the reason was for his tears, he simply replied that her son will achieve martyrdom, but consoled her by adding that God will create a nation which will mourn Hussain till the Day of Judgment.

Another famous saying of the Prophet at the same time became synonymous with the name of his grandson Hussain.

"Hussian-o-Minni wa Ana Minal Hussain". Hussain is from me and I am from Hussain.

One can explain this Hadith that Hussain, being the grandson of the Prophet was from him biologically? How is it that a grandfather was from his grandson needs to be explained. One reason is that Prophets of God speak spiritually rather than materially.

He was talking about Islam the religion, he was assigned by God to propagate God's religion. He was for Islam and his whole life was for Islam and its establishment on earth. Any break in this mission would subvert the purpose of his creation.

The message of the Holy Prophet in this saying was that Hussain will, in some near future save this mission from destruction; hence the very purpose of his being will be saved by the sacrifice of his grandson. He was predicting the future. The story of Karbala then unfolded. The story of the battle of Karbala and subsequent events that follow can be found here: https://en.wikipedia.org/wiki/Battle_of_Karbala

“The most merciful person is the one who forgives when he is able to revenge.”

It is said the weak can never forgive.  So, Hussain’s impulse to forgive places him at the forefront of the strong.  His forgiveness of Hur, commander of the forces sent to entrap and eventually kill him in Karbala, is well known.

Less of the battle widely known, though, is Hussain’s intervention on behalf of a prisoner following the Battle of Nahrwan, fought during the caliphate of his father, Ali ibn Abu Talib.  As Hussain was walking past a group of prisoners, one of the prisoners beckoned to him to further loosen the ropes around his wrists.  Hussain, of course, obliged.  It was a tragic irony that this very man took Hussain’s life 21 years on.

Hussain’s actions in Karbala perfectly combined generosity of wisdom, means and love into an awe-inspiring sacrifice – the embodiment of generosity of self.  This is the Hussain from whom we draw inspiration.  He embodied altruism in every step he took.  He was a man who was magnanimous in his concern for others to the utmost degree.

Enter the Arbaeen walk of 2017, I cannot help but marvel in complete awe the generosity every pilgrim receives both along the march and in the cities of Najaf and Karbala one can not fathom the selflessness and generosity along the way.

It is said that the people of Iraq work hard all year and spend it all in the hospitality of the pilgrims during the Arbaeen march and for anyone who thinks this is a myth I suggest you attend the Arbaeen march next year and bear witness to it, I promise it will take your breath away and completely change your perception of Islam. But wait don’t just take my word for it, these acts of benevolence are backed by statistics.

If generosity could indeed be measured, then Iraqis are the world’s most generous to strangers, according to a new global index of charitable giving. Largely contributing to this designation is the generosity exhibited by millions of Iraqis toward pilgrims during the Arbaeen, which marks the end of a 40-day mourning period following Ashura, the religious ritual that commemorates the martyrdom of Imam Hussein.

Eighty one percent of Iraqis reported helping someone they didn't know in the previous month, in a global poll commissioned by the Charities Aid Foundation (CAF).

Notably, Iraq has twice been ranked top in terms of helping strangers in spite of the country’s instability and violence.

Retaining the value of hospitality from their Arab ancestors, Iraqis are particularly keen on displaying their generosity –which stems from an inherently generous culture—during the annual commemorations of Arbaeen. However, the main drive for this bounteousness is their love and devotion for Imam Hussein, who was martyred in the holy land of Karbala 1400 years ago and whose memory is honored in the event.

As millions of pilgrims from all over the world converge on Karbala to visit the shrine of the revered imam, their needs are largely met by Iraqis who pledge to serve Imam Hussein’s visitors. With many walking long distances to reach the place of pilgrimage, necessities like food, water, and medical services are provided for free.

Weeks ahead, preparations get underway. People set up houses, pavilions, and congregation halls or ‘Mawakeb’ to accommodate strangers who cross their path. Mattresses, covers, beverages, food, and medication are offered for the world's largest annual gathering.

Volunteers, young and old, male and female take part in serving all necessities from victuals to accommodation without charge, calling themselves servers (or Khaddam) of Imam Hussein. 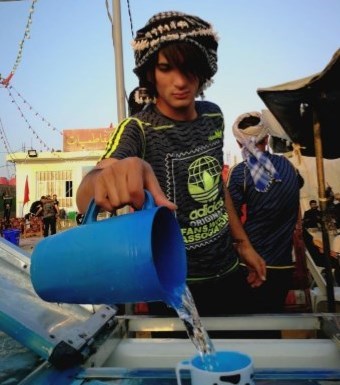 The Arbaeen is also a chance for non-Shiites to show that a divided Iraq is not all of Iraq. Many Sunni and Christian Iraqis offer their services so they can take part in this massive show of devotion.

Through the world’s eyes, these gestures may seem incomprehensible. Questions tapping into why they put so much effort into serving complete strangers and what they gain from such contributions to the mass march toward Karbala surely arise when news reports cover this annual event.

However, for many, giving is an act of worship. The recompense is not worldly but rather takes the form of good acts compiled in their Book of Deeds. They seek salvation through the door of Imam Hussein, who is the beacon of hope.

In this day and age, the term world peace seems like a myth but if there is such a thing as world peace the Arbaeen march with all its generosity, selflessness, love and freedom lives true to the term.

For people who see the manufactured violent face of Islam in the mainstream media, need to make the journey to witness the true face of Islam where it shines the brightest.

My profound and sincere gratitude to the New Horizon Conferences and to the NGO Hussain The International Love for inviting me to be a part of the Arbaeen March a truly life-changing event that displays humanity at its very best.

Dr. Riaz Karim holds a PhD from Harvard University. He is also the Director of Veritas Centre for Strategic Studies in London. He is also an analyst and commentator for a number of media outlets around the world.