TEHRAN (Tasnim) – A senior author and political commentator from Canada praised Iran’s campaign against terrorism in the Middle East and said the Islamic Republic has been fighting the phenomenon while the West’s support for terror groups in the region is well documented.

“Iran has played a very important role in defeating terrorism in the Middle East; it has acted in accordance with international law, and it is to be commended for its efforts,” Mark Taliano said in an interview with the Tasnim News Agency.

“The US Empire projects its own criminality on “prey” nations, and Iran is in the crosshairs, but Iran has been fighting and destroying terrorism, whereas the West has been supporting and growing terrorism,” he added.

Taliano is an author and independent investigative reporter who recently returned from a trip to Syria with the Third International Tour of Peace to Syria. In his new book titled “Voices from Syria”, he combines years of research with on-the-ground observations to present an informed and well-documented analysis that refutes mainstream media narratives about the dirty war on Syria.

Tasnim: As you know, the resistance forces and the armies in Syria and Iraq have recently liberated last strongholds of the Daesh (ISIS or ISIL) terrorist group in the Arab countries. What do you think about the recent military achievements? Do you have a positive perspective on the security situation?

Taliano: The Axis of Resistance is defeating all of the terrorist groups, all in accordance with international law, and with a view to bringing peace and stability to the Middle East and beyond. I have a very positive view on the security situation. New alliances and trade partnerships are being formed to strengthen the resistance against the criminal, terrorist-supporting regimes that oppose trajectories of peace and stability. US-led NATO and its allies, including Israel and the Persian Gulf monarchies, need to be held to account for their high crimes against sovereign states such as Syria, Iraq, and beyond.

US imperialism is creating globalized war and poverty.  Thanks to the West’s illegal invasion of Libya -- imperialism under the cover of the so-called “Responsibility To Protect”, Libya, now a failed state, is host to a growing slave trade, it is a hub for terrorists, including Daesh, and it is the source of multitudes of refugees. Libya was a “successful” regime change. Gaddafi was murdered, and a nation that previously boasted of the highest Human Development Index in Africa was destroyed.

The genocidal sanctions and ultimate illegal invasion and destruction of Iraq was also a successful Regime Change, in the sense that the country, its institutions, and its infrastructure were destroyed and plundered. Fortunately, Iraq is now rebounding.

The Regime Change in Ukraine was also successful in the sense that the elected government was overthrown, and the country is now divided, impoverished, and in a state of war. Yet another imperial success story.

The totality of the impacts of illegal warfare, post 9/11, and their enduring consequences, has created an overseas holocaust as described by Dr. Gideon Polya.

Tasnim: Major General Qassem Soleimani, the commander of the Quds Force of Iran’s Islamic Revolution Guards Corps (IRGC), recently declared the collapse of the Takfiri terror group in Iraq and Syria. What is your assessment of Iran’s role in the anti-terrorism campaign in the Middle East?

Taliano: Iran has played a very important role in defeating terrorism in the Middle East. It has acted in accordance with international law, and it is to be commended for its efforts.  The US Empire projects its own criminality on “prey” nations, and Iran is in the crosshairs, but Iran has been fighting and destroying terrorism, whereas the West has been supporting and growing terrorism.

The US-led Empire seeks to label Iran’s Islamic Revolution Guards Corps (IRGC) a “terrorist” entity in its on-going campaign to destabilize and ultimately destroy Iran.  If we recall General Wesley Clark’s earlier, public statements, the Pentagon’s plan was 7 countries in 5 years, and Iran is on the list.

Tasnim: Secretary General of the Lebanese Hezbollah Resistance Movement Hassan Nasrallah said recently that despite the US claims about fighting terrorism, it spared no effort to help Daesh forces in the Syrian town of Al-Bukamal. “The US helped Daesh as much as it could in Al-Bukamal short of directly engaging forces that fought to liberate the town from Daesh,” the Hezbollah leader said. What do you think about the remarks?

Taliano: The West and its allies have been directly supporting terrorist groups since well before the war on Syria started.  The terrorists are there because of the West, not despite the West.  All of this is well documented.  Daesh has been a “covert proxy” for the West in Syria. In an earlier article, I described it as a “place setter”.  The West infests an area with Daesh, then destroys the area under the fake pretext of going after Daesh, and then re-occupies the area with a new batch of terrorists.  In the case of Raqqa, for example, the area was destroyed, Daesh was re-located to other fronts – with US coalition air support -- and now “overt proxies”, the anti-democratic SDF Kurdish forces are the new occupiers.

In Deir ez-Zor and elsewhere the US has been brokering deals between Daesh and Kurdish forces with a view to advancing its imperial projects of occupation and plunder.  Recently, original documents were discovered which detail the terms of a deal between Daesh and the SDF. 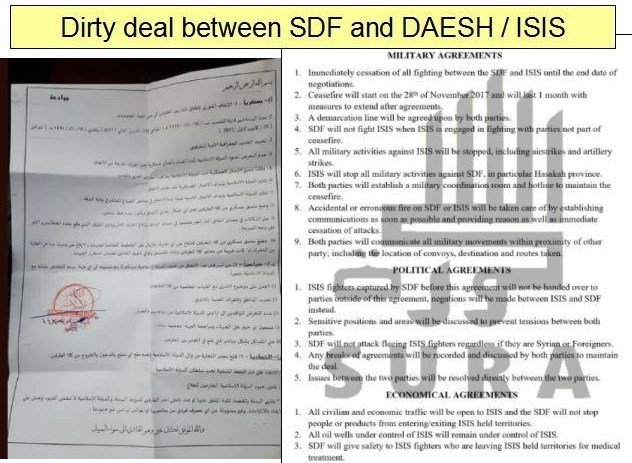 Now that the terrorists are being defeated, the West’s direct support is more transparent.  The Hezbollah leader is being diplomatic when he states that  “The US helped Daesh as much as it could in Al-Bukamal short of directly engaging forces that fought to liberate the town from Daesh,”  Daesh and all of the terrorists are there because of the West, not despite the West.

Syria Calls on UNSC to Take Action against State-Sponsored Terrorism