Persepolis: The Most Impressive of All The Archaeological Sites in Iran

TEHRAN (Tasnim) - Persepolis or Takht-e Jamshid is one of the most beautiful architectural masterpieces of the second half of the first millennium B.C and was created by the able hands of ancient artists.

The building operations of this magnificent ensemble went on for more than a century and it eventually began falling into ruin after the downfall of the Achaemenian dynasty. Stones from nearby Rahmat Mountain (the mountain of mercy) which were adequate in every way for the purpose, were used in the construction of this ensemble.

The large column bases and capitals of the palaces were made of limestone of various colors and monolithic blocks of Stone were used to make the porticos, stairs, corridorsand many of the window frames. No mortar was used between the stone blocks and many of them were joined by iron clamps and molten lead. More than 3,000 designs adorn the buildings and mausoleums of Persepolis. Although these designs are numerous, they are amazingly similar. 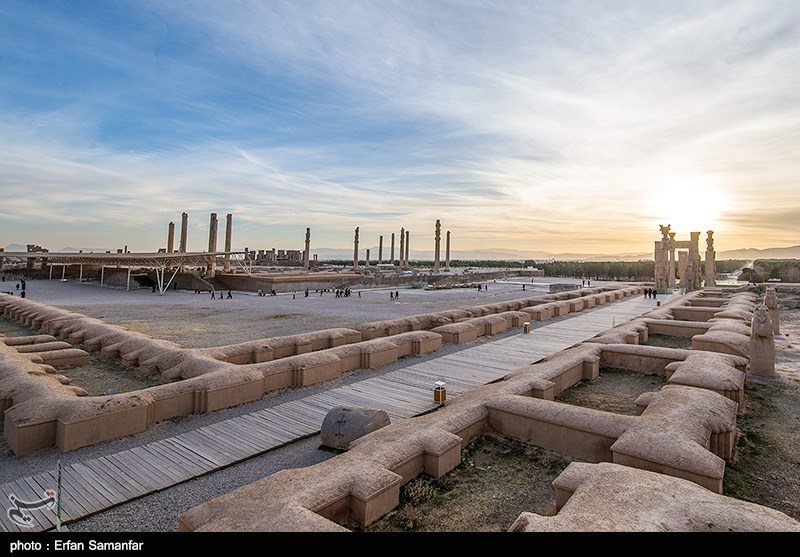 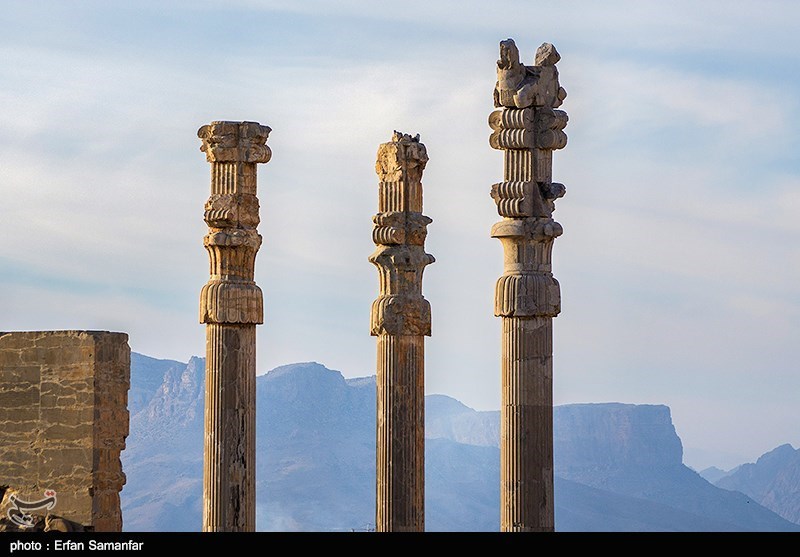 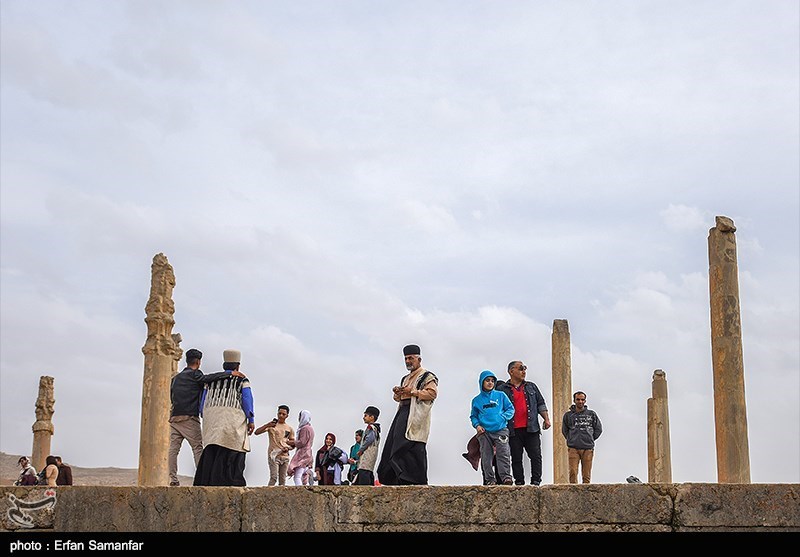 The individual figures of soldiers aligned along the stairways and parapets are repeated hundreds of times with only minor variations. Persians, meds and most foreigners are portrayed with identical faces. Their heads and feet are invariably depicted in profile. The Persians wear long creased robes and are shown in a limited number of representations, whereas the Medes are all shown wearing knee-high garments with short sleeves. All available evidence shows that Persepolis has served dual but related purposes.

Firstly, being the seat of the government, it constituted an appropriate treasury for the ever-increasing Wealt of the country and secondly, it was a befittingly majestic locale for the grandiose ceremonies wherein the Iranian emperor received in audience the heads of state and representatives of the 28 countries under the his dominion. Every year, the grand festivities of nowrooz were held in Persepolis and, upon the orders of Darius the Great, astronomers prepared a very precise calendar that is still in existence on the basis of which the first day of the year coincided exactly with the first day of spring. Persepolis covered an area of more than 130,000 square meters. Located 60 kilometers north of Shiraz this superb historic building ranks among the most important architectural achievements of the world and is included in the world Heritage list of UNESCO. 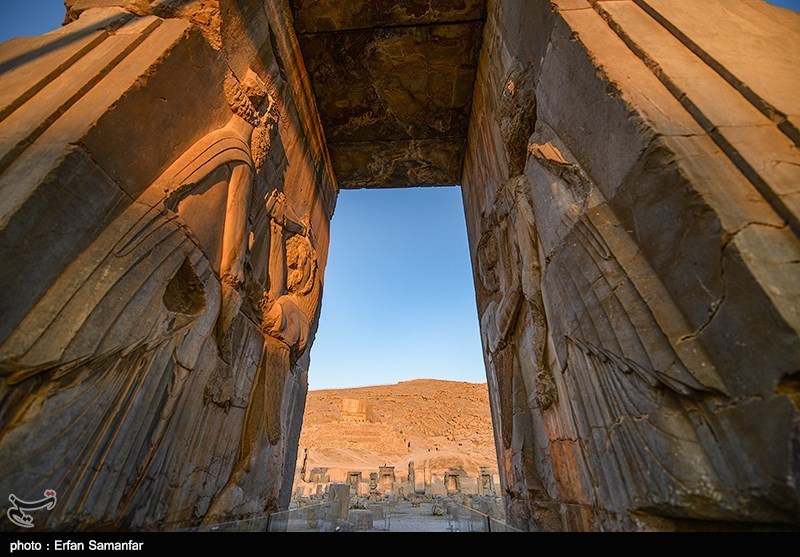 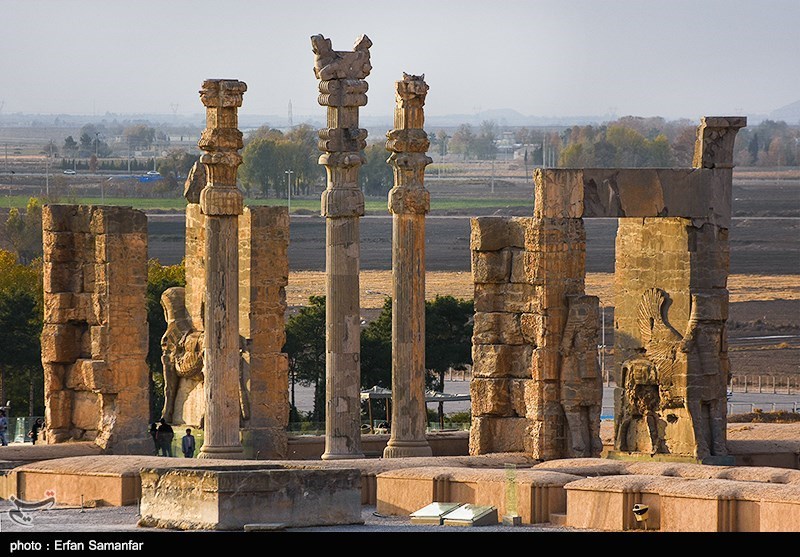 The architectural design of all palaces consists of a square central hall surrounded by several regular rows of columns and covered by a flat roof. This simple design was extended by one or more terraces adjoining the sides of the central hall and having columns of the same height and topped by roofs level with the main one. Thousands of guests could thus attend the royal banquets under a single roof.

All the stone columns were fluted but their bases and capitals were different in various palaces. The tall massive columns of the large halls were entirely made of stone whereas the squatter ones had wooden shafts and stone bases.some of the stone columns reached a height of 20 meters and their capitals represented a pair of lions or bulls which occasionally had human faces.

All the porticos are made of a stone perfectly harmonious with the other ones used in the building. Their lintels are uniformly crown-shaped and distinct vertical ridges give them a curved.appearance.Four-stepped Merlons

All the stairways are flanked by parapets shaped as four-stepped merlons and, as similar crenels are visible on the edge of Darius I’s crown at Bistun Mountain, they bear particular significance. 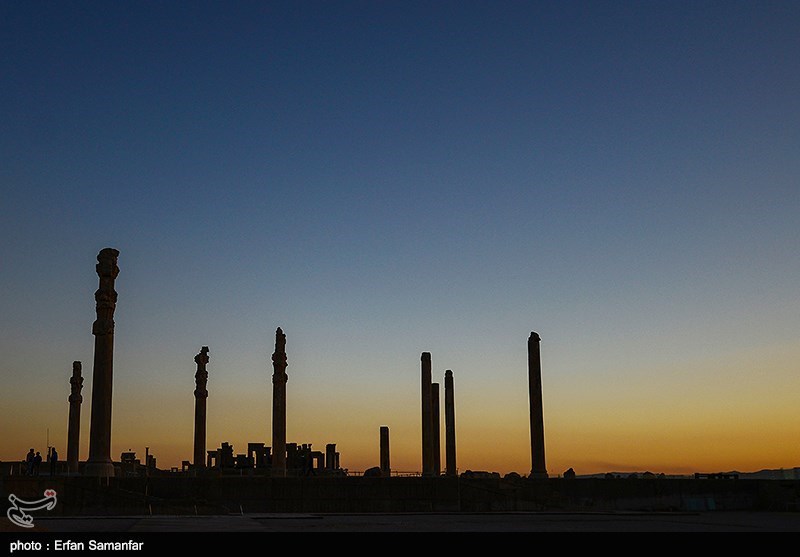 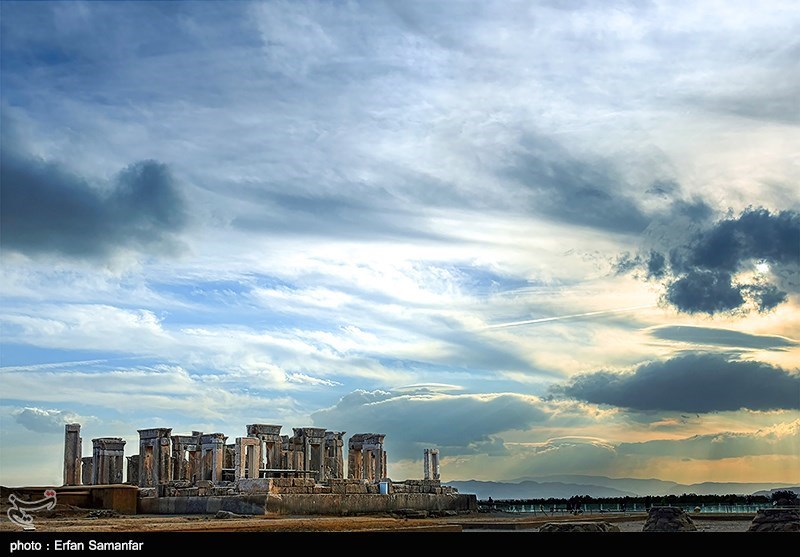 In general terms, the figures represented on the bas-reliefs at Persepolis can be divided into four groups:

4-The emperor and his heir to the throne

The final present –day entrance of Persepolis is located on its western side and consists of platform accessed via a pair of opposed flights of stairs. Each flight is 7 meters wide and comprises 111 stairs around 37 centimeters long and 10 centimeters high and is flanked by crenellated parapets.

The gate of nations

Past the entrance stair flights, the first building that comes in sight is a hall covering some 620 square meters. On the upper part of two stone walls of the western portico, above bull-shaped sculptures, three inscriptions in cuneiform script are visible which leave no doubt as to the destination of this palace

The word Apadana means audience hall .After crossing the Gate of Nation ,the representatives invited were received in audience in the Apadana palace ,which stands around 4.5 meters above the main platform of persepolis .It houses a 60*60 meter central hall and is surrounded on three sides by terraces which break its monotony.

Thirty-six tall columns laid out in six rows supported its Roof and each of the terraces had 12 columns (arranged in two rows of six) of the same height as those of the central hall. The construction of the Apadana was began during the reign of Darius I and completed thirty years later under Xerxes.Only 14 of the original 72 main columns of the Apadana are still in existence, soaring around 20 meters high. 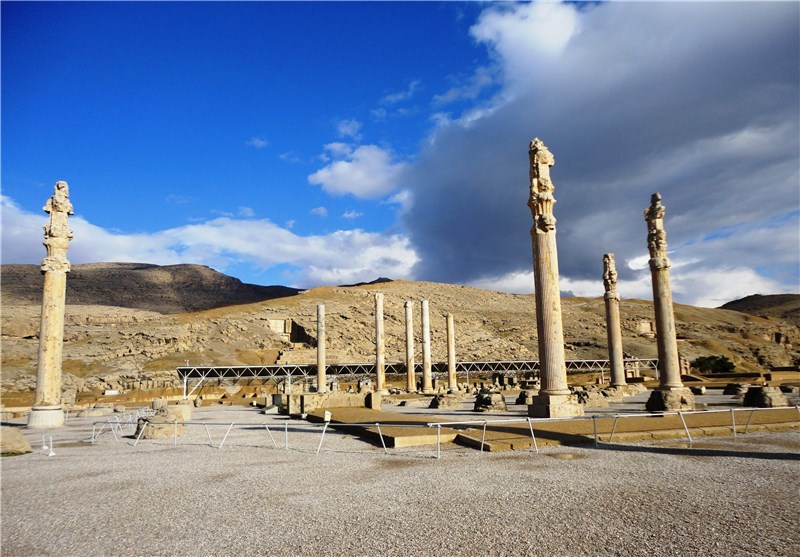 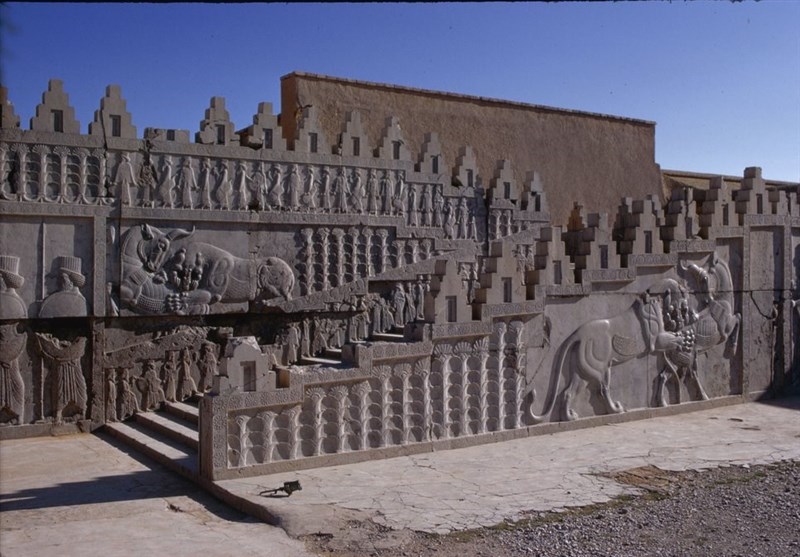 On the evidence of inscriptions in three languages on the frontispiece of its entrance terrace, this palace was built by xerxes.Its large gateway bears bas-reliefs which depict Xerxes (Wearing a plain, uncrenelated crown) under a royal sunshade, entering or exiting the palace in front of his sunshade –bearer and towel-bearer.

One of the first palaces built on the platform of persepolis was a southward oriented building (looking towards the sun)on the southwest of the Apadana .The word tachar means winter house in Persian. The stones of this palace are polished and it is therefore also called mirror hall. This palace belonged to Darius.

Covering 4,700 square meters, this hall is the largest palace of persepolis and is located on the north of the ensemble, a little above the treasury, opposite the Apadana .This square palace, whose roof was supported by 100 columns and which had eight large porticos, was used as an assembly hall by the Achaemenian dignitaries and military chieftains gathered in presence of the emperor. 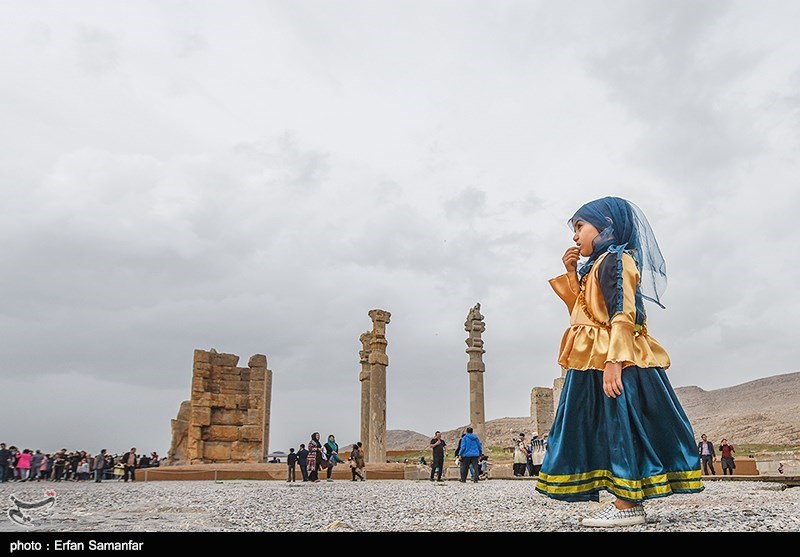 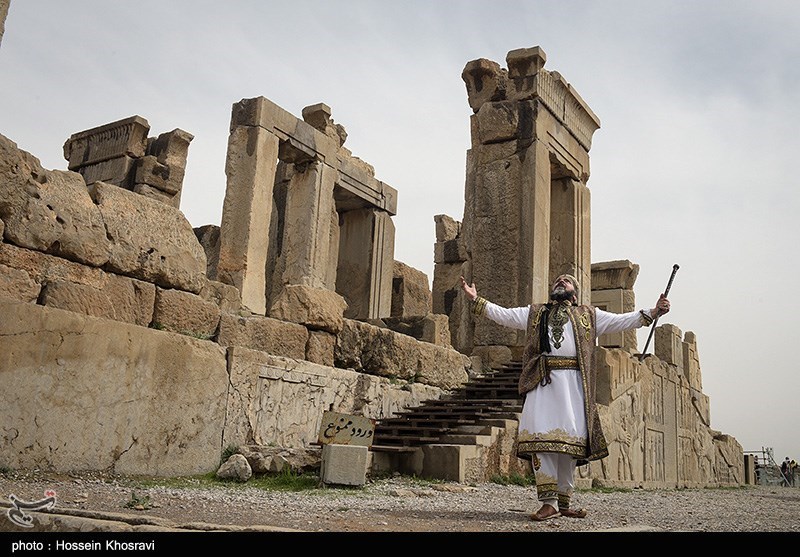 At the center of the pavilion of Persepolis, there is a small palace connected to the other ones by three doors and several corridors. For this reason, this palace is often called the central or three doors palace Because the country‘s dignitaries have left behind basa-reliefts on its stairway and in view of its location within the ensemble, this palace is sometimes called council Hall as well. This palace has an almost square plan.

This palace has an L-shape plan and its wings extend south of Xerxes palace and west of the treasury. The reason for which this palace has been labeled as a harem is that it was surrounded by a massive wall and only had a small entrance on its northwestern corner. This arrangement indicates that the function of this building was such that strangers were not allowed to enter it.

Karun River: The Only Navigable Waterway in Iran