Thousands Gather in Britain to Support US George Floyd Protests

TEHRAN (Tasnim) – Protesters in London, Cardiff and Manchester in UK gathered on Sunday in solidarity with demonstrations in the United States that were sparked by the death of George Floyd.

In London, demonstrators first gathered in Trafalgar Square, chanting “No justice, no peace”. What appeared to be many thousands then made their way through Whitehall past Downing Street and the Houses of Parliament, then over the Thames to the enormous and moated US embassy at Nine Elms in Battersea.

Defying the ban on mass public gatherings because of the coronavirus lockdown, the demonstrators held cardboard placards reading Justice for George Floyd, Black Lives Matter, White Silence is Compliance and Rest in Power.

The Metropolitan police said they had made five arrests outside the US embassy, three for violations of the coronavirus lockdown guidelines and two for assault on police. A statement from the force said: “Those arrested are aged between 17-25 years. All have been taken into police custody.”

In updates late on Sunday, the Met said a total of 23 people had been arrested during the London protests, The Guardian reported.

Traffic was brought to a standstill as protesters crossed Lambeth Bridge, many chanting “I can’t breathe” – a reference to Floyd’s desperate plea as a white Minneapolis police officer knelt on his neck.

Protesters also made their way to Grenfell Tower in west London. One marcher wrote Black Lives Matter on the memorial at the base of the tower block, as others watched on in silence before applauding as they finished. 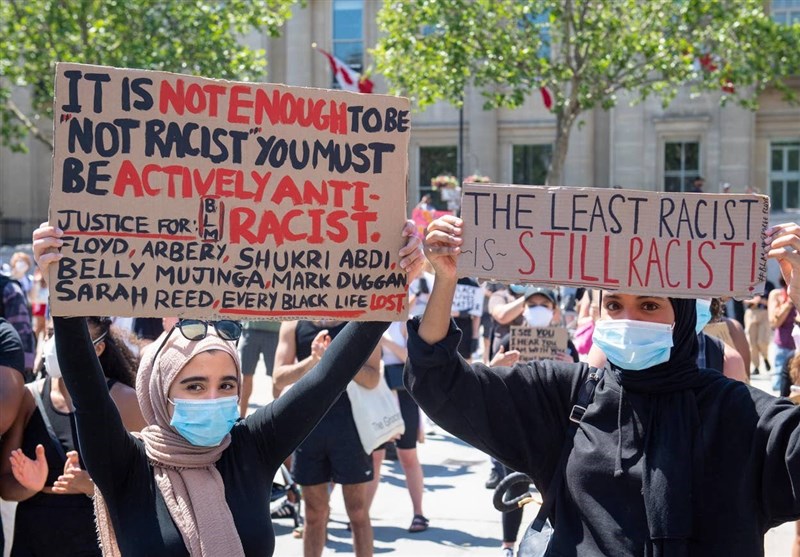 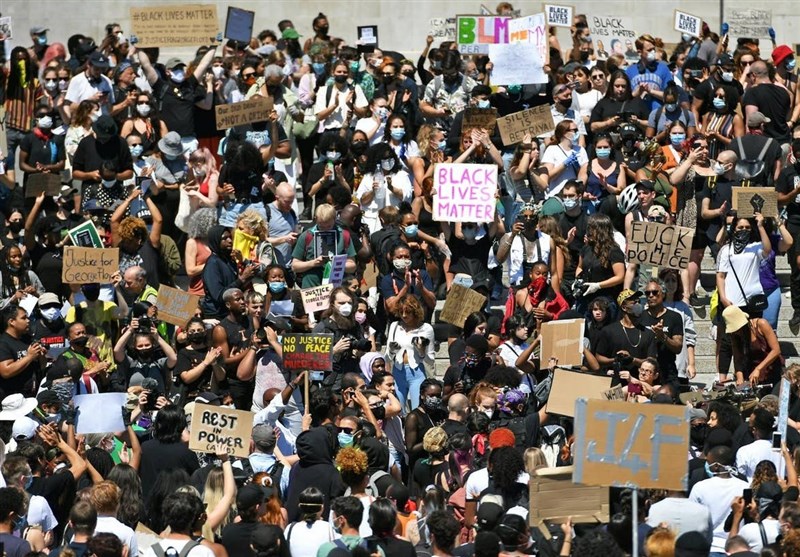 In Cardiff, hundreds of protesters gathered peacefully by the walls of the castle, with banners including one that read: “If you are neutral in situations of injustice you have chosen the side of the oppressor.”

Mariyah Zaman, a creative writing and media graduate, tweeted that it was a short, socially distant demonstration. “Racism is not an American issue, it’s a humanitarian issue. It exists here and it is very much apparent in Wales as the speakers today recalled.”

One protester, Donna Ali, told the BBC: “If you’re silent, you’re not going to change anything. It’s something we’ve experienced for many years, whether it’s in the US or the UK.

“It’s really heart-breaking that people can’t see past the color of skin.”

In Manchester, protesters marched through the city centre, chanting “Black Lives Matter”, before gathering at 1pm in St Peter’s Square, where they knelt in tribute to Floyd.

The London protest was watched by Sally Hitchiner, an associate vicar at St Martin-in-the-Fields church on Trafalgar Square. She told PA Media: “I’m very sympathetic to the issue but also surprised to see the strength of emotion that has gathered people together.

“It’s showing there are people in the UK who care passionately about the situation in the US. Clearly they’re not following lockdown and social distancing, but I think there’s a huge amount of passion there and that’s overriding their concerns.

“It’s an issue that requires passion but at the same time there’s a huge amount of risk in what they’re doing.”

Brexit: £705mln to Ensure Britain's Borders 'Fully Operational' When Out of EU

As Virus Rages in US, Trump Finally Wears A Mask

As Virus Rages in US, Trump Finally Wears A Mask