TEHRAN (Tasnim) – Iranian President Hassan Rouhani described the relations between Tehran and Beijing as strategic, hailing China’s stances in support of Iran in international arenas, including on the JCPOA and the US’ unilateral sanctions.

Iran and China maintain very good ties and the two countries’ common stances on international issues are indications of the good level of the relations, Rouhani said in a meeting held in Tehran Saturday with Chinese Foreign Minister Wang Yi.

He referred to the 50th anniversary of the two countries’ diplomatic relations and the bilateral, regional and international cooperation between the two sides, stressing the need for expediting the implementation of agreements Iran and China have signed in different infrastructural and developmental fields.

He also called for promotion of cooperation between the two sides’ private sectors.

The president further lauded Beijing’s support for Tehran in international arenas, especially its stances on the 2015 nuclear deal, known as the Joint Comprehensive Plan of Action (JCPOA), and on the US’ excessive demands and its sanctions against the Islamic Republic.

He said cooperation between Iran and China for implementation of the nuclear agreement and fulfilment of commitments by the European parties to the JCPOA could change the current status of the multilateral accord. 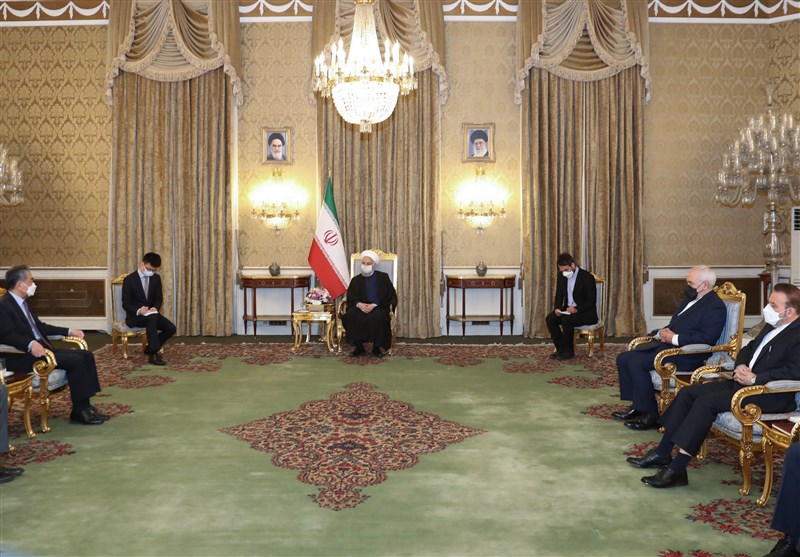 The Chinese top diplomat, for his part, said Beijing attaches great importance to its ties with Tehran.

He also said China has always opposed the US’ excessive demands and unilateral sanctions.

Wang said the JCPOA is a multifaceted document and the result of multilateralism, adding that Washington’s withdrawal from the accord was a move against international norms.

China believes preserving the JCPOA is protecting multilateralism and safeguarding international laws, he said, adding that the US should return to the agreement and lift its sanctions on Iran.

Elsewhere in his remarks, Wang said China will provide more coronavirus vaccines to Iran in the future based on the agreements reached between the two sides.

The Iran-China Comprehensive Strategic Partnership was announced in a joint statement during a visit by Chinese President Xi Jinping to Tehran in 2016.

The cooperation roadmap consists of 20 articles, covering Tehran-Beijing ties in “Political,” “Executive Cooperation,” “Human and Cultural,” “Judiciary, Security and Defense,” and “Regional and International” domains, according to the statement released back then.