TEHRAN (Tasnim) – Protesters from Extinction Rebellion staged a theatrical protest in the British coastal town of Falmouth on Saturday, near to where G7 leaders are holding a summit.

Activists dressed as cleaners scrubbed down the shop fronts of two banks in a symbolic move to highlight what they claim is an increase in the funding of fossil fuels since the Paris Agreement.

The action was called "Dirty Scrubbers."

Meanwhile, on a nearby beach, campaigners from the charity group, Oxfam, also urged G7 leaders to step up their actions to tackle climate change.

Protesters, wearing masks of the seven leaders who are attending the summit, brought a message in a giant bottle to launch an urgent call for the environment.

Dozens of surfers, kayakers, and paddle boarders also took to the sea in protest while others chanted and held banners.

Amy Bray, an 18-year-old founder of the conservation charity 'Another Way' explained why she took part in the protests. 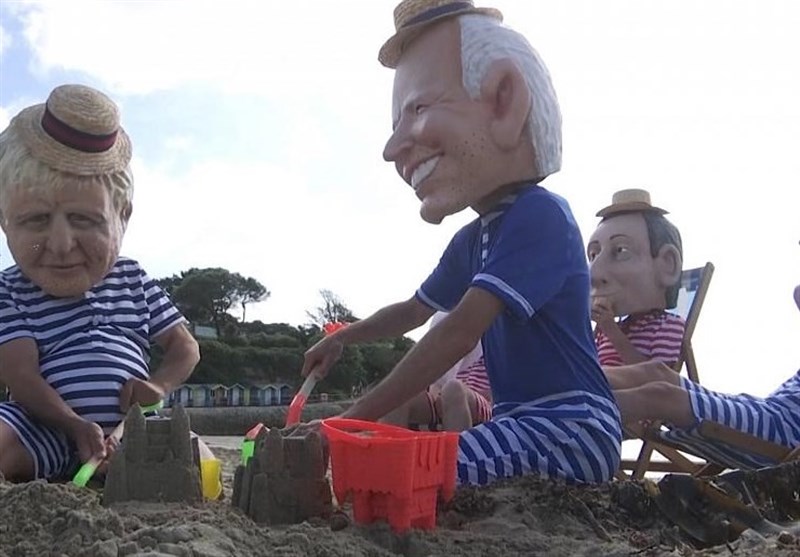 "I believe that we need to incorporate the climate and biodiversity emergency into every aspect of policymaking," she said.

"It's not just about technological solutions - it's about the whole system's charge and changing the way we consume in order to live in harmony with nature and our planet, instead of just taking."

"The British government chose Cornwall as the location for the G7 summit because of its extreme natural beauty," he said.

"And the climate protesters that have taken to the sea and land throughout the whole of the meetings say that it's perfect because these are the types of places that can highlight the most the devastating consequences of climate change."