TEHRAN (Tasnim) – An American author said that the United States needs to make the first move by repairing the breach of the nuclear deal during Trump’s era.

In an interview with the secretariat of the 2nd International Conference on the Decline of the United States: The Post-American World, the American author, publisher and activist Sander Hicks, shared his views on the decline of the United Sates and the obligations by the its government regarding making the first move to revive the Iranian nuclear deal, which they breached during the presidency of Donald Trump.

“I do agree with the spirit of a critical analysis of Capitalism and Imperialism,” Hicks remarked. “It is not just the United States, but the whole world that is aching for a new paradigm of a more humanitarian and more spiritual and more democratic socialistic paradigm. And that is where the world, internationally, needs to move towards a world of peace and non-violence; a world of economic sharing and cooperation. And that is very contrary to three corporate capitalism and Big Oil and big military adventures.”

“The United States’ withdrawing from Afghanistan is defeat. Using so much money, so much capital, so much military power, and yet meeting with frustration and defeat and death,” he said. “It really is an opportunity not to gloat, not to laugh, but to say what is the new possibility that is emerging out of this crisis? The new possibility is [the reality] that violence does not work. Violence only results in more violence.”

“What the Iranians are up to is trying to envision a new world, new possibilities beyond US domination,” Hicks went on to say.

“Anybody that says the US is not in a state of change is clearly clinging to an illusion of nationalism,” he maintained. “The US is changing all the time. The US needs to change. The US was founded on some democratic ideals and there was already an inherent contradiction because those democratic ideals were contradicted by the physical reality of slavery and stealing the land from the indigenous people and breaking treaties and contracts and agreements. So, the ideals of the enlightenment were in a contradiction to the fact that the country was started by slavery. And so the country has always been changing and always evolving and trying to resolve its contradiction. And I would say that you really have to.”

“My Buddhist training trains me to see the world in constant flux. Nothing is static. It’s always evolving,” Hicks explained. “From a Muslim perspective, you would call it the wisdom of God. God is inherent in the universe, and through daily prayer and regular prayer, we go beyond the ego and we connect to the Almighty, the Most Merciful, as a way to really see what is true and actual. Because if we cling to nationalism, it is defensive, it is nervous, while there’s no reason to feel anxious or defensive.”

“We do need criticism of imperialism from all channels,” he continued, “because Imperialism is like the biggest cardinal sin of any large Capitalist state. It tends to move into empire domination, colonialism, extraction of natural resources from less advantaged countries,” he added.

“My analysis is that Trump was a clown,” Hicks said, referring to the former US president. “The illegal and criminal Trump was a neo-fascist. He was clinging to nationalism. His character is just rotten.”

“Mike Pompeo was obsessed with killing your general Qassem Soleimani--may he rest in peace-and Trump let it happen,” he asserted. “Our country killed Soleimani with a drone, but then Trump [at least] did pull back and he didn't escalate and let the US slide into a full blown war with Iran. He knew that war is going to lead to a declining popularity. He really wanted to get re-elected. He really had this vacuous emptiness inside him that wanted love and couldn't believe he wouldn't get re-elected, which led to an outright rebellion against Congress on January 6th.”

Concerning Biden and the Iran deal he said, “[a] lot of American scholars said okay the US could get back on track with the Iran deal but we have a very small window. I guess everyone is waiting for the other to make the next move. It's unfortunate. The US does need to make the first move. The US does need to repair the breach of Trump and his minions backing out of the Iran nuclear deal.”

Hicks added: “People from ultra-left are so angry at US Imperialism that they would say the US has no right to participate in a new formation of world order.”

Hicks wished there would be “a United States government or United States leadership, and even an international spirit of international cooperation that was based on what people need rather than how we can stoke rivalries, anxiety and nationalism. That world is really possible when we connect to each other as human beings and we talk about human needs, like Medicare, health insurance, affordable housing.”

“It’s not very popular to talk about peace and non-violence, but I don’t care really,” said Hicks, who organized the second annual "Non-violence Works" conference recently. “It’s audacious to stand for peace and non-violence. But I think this is in keeping with prophet Mohammed, with Buddha, with Jesus--peace be upon all of them.”

“Peace and non-violence is the way of teaching reasonable conflict resolution,” he believed. “It’s a skill; it’s a professional skill that can be taught; that can be shared.”

“We have to envision a new world in which everyone has a role, even the 1%” Hicks quoted Martin Luther King as saying, adding, “I think it’s great that there’s more class consciousness, and there’s more “we are the 99%.” And we need a new economic system. So, I’m all about class struggle, but I’m not about violence. I know that’s a bit of a contradiction for people, but I think with God all things are possible. I think the process of prayer and meditation gets you out of the limits of your own ego and into the world of absolutely no limits.”

“I think the Islamic Republic of Iran is onto something by saying our world is a spiritual world, and that our political solutions have to be informed by spirituality,” Hicks concluded. “I think the US needs a little bit more of that actually; not in a violent Christian, or pseudo-Christian, way, the Christianity of assassination, but the Christianity of the historical Jesus; the one that Muhammad recognized as a high brand of prophecy.”

The 2nd International Conference on the Decline of the United States: The Post-American World will be held on November 2, 2021, by Imam Hussein Comprehensive University and the Secretariat of the Expediency Discernment Council, in cooperation with the universities and research institutes.

For more information, interested parties may see the conference website at www.usdecline.ir and the virtual pages of the conference secretariat on social media at @usdecline. 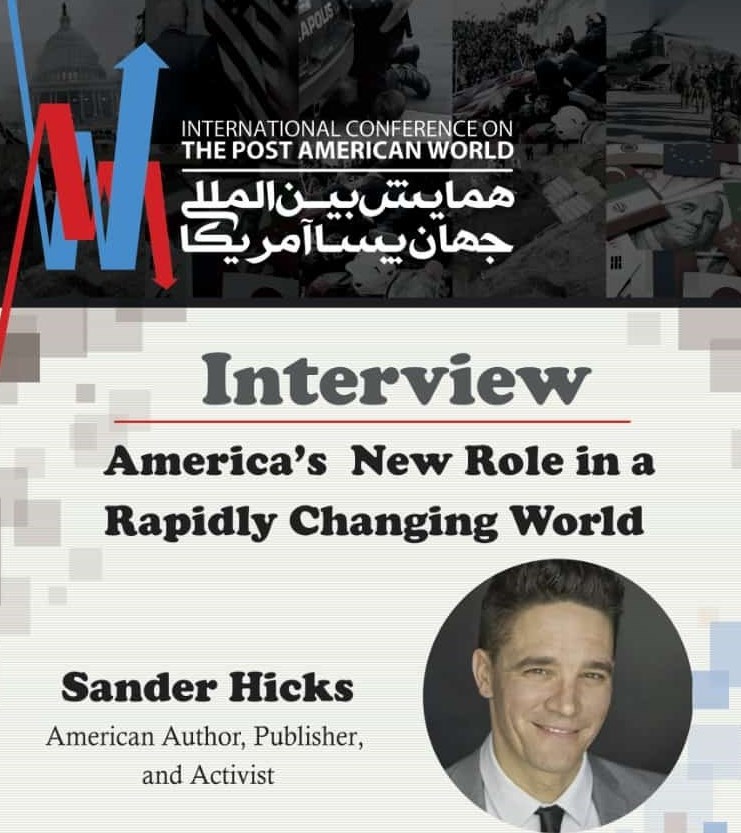 US Pullout from Afghanistan, Iran Deal to Lead to Decline of American Empire

Unity of Regional Countries to Accelerate Decline of US: Pakistani Scholar

US Pullout from Afghanistan, Iran Deal to Lead to Decline of American Empire

Unity of Regional Countries to Accelerate Decline of US: Pakistani Scholar