TEHRAN (Tasnim) – More than two decades after the Soviet Union collapsed a majority of citizens in the independent states believe that the split brought nothing but harm, according to a new Gallup poll.

Gallup a research-based, global performance-management consulting company released a poll conducted in 11 countries of the former Soviet bloc asked participants whether the “breakup of the Soviet Union benefitted or harmed this country?”

Overall statistics revealed that 51 percent of the combined total said that breakup hurt their country’s national interest while only 24 percent argued in favor of independence. 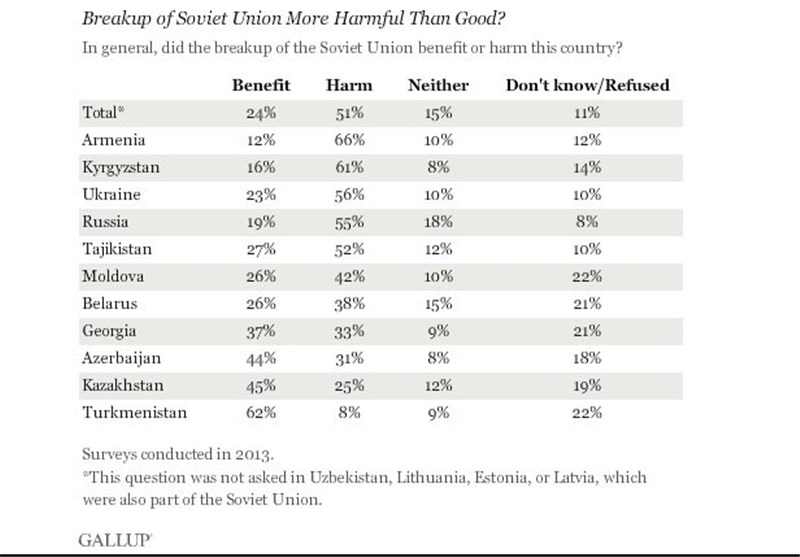 Kazakhstanis, Azerbaijanis and Turkmens are more likely to see benefit than harm from the breakup. In Armenia, Kyrgyzstan, Ukraine, and Russia people answered they see “harm” three times more often than “benefit.” In Georgia, the people are more or less split, RT reported.

The survey also reveals that those who had conscious experience of living in the USSR are nearly three times more prone to say its collapse harmed the country. People under 30 are split on the issue with 33 percent seeing harm and 30 percent – benefit, while 20 percent admit they don’t know and refused to answer.

The Gallup study concluded that those with higher education are more likely to accept and support the benefits that came from the split with Moscow, with Kyrgyzstan being the exception.

Those states that have witnessed ongoing conflict, violence or ethnic tensions are likely see greater harm from the collapse of the Soviet Union, the research says.

The Gallup study was based on personal interviews of at least 1,000 people conducted between June and August 2013 in each of the sampling countries, aged 15 and older. Uzbekistan, Lithuania, Estonia and Latvia despite formerly being a part of the Soviet Union were excluded from the polling.

Soyuz Rocket’s Malfunction Will Be Eliminated in Two Weeks: Sources

US Democratic Race in Iowa Heats Up as Caucus Approaches

More than 2,000 Now Infected with Coronavirus; 56 Dead in China