EU in Talks with US to Remove Iran's Banking Problems: Mogherini

TEHRAN (Tasnim) – The European Union’s foreign policy chief said the bloc has been holding talks with the US to remove the obstacles in the way of banks trying to get into Iran after implementation of the Joint Comprehensive Plan of Action (JCPOA), a lasting agreement on Tehran’s nuclear program.

In an interview with the Tasnim News Agency in Tehran, EU High Representative for Foreign Affairs and Security Policy Federica Mogherini said efforts are underway to encourage European banks to cooperate with Iran following the coming into force of the JCPOA, the nuclear deal between Iran and the Group 5+1 (Russia, China, the US, Britain, France and Germany) that terminated nuclear-related sanctions against Tehran.

She also noted that the EU is in contact with US officials to help settle the banking problems facing Iran that are believed to be caused by Washington’s obstructive approaches.

What follows is the full text of Mogherini’s interview with Tasnim’s Abbas Aslani:

Tasnim: The first question is related to the EU office in Tehran. We’ve been hearing some news related to this. Iran’s foreign minister Mr. Zarif said you discussed the issue today and some procedural issues seems being done. How much of time do you think is needed for opening this office in Tehran, as I heard that in the joint statement you said that a liaison team will be sent to Tehran? By the time that the office is opened, how will those diplomats work and be based in Tehran? What are the technical or legal problems related to this issue?

Mogherini: As minister Zarif mentioned today in the press conference, there are some procedural issues to be fought internally in Iran, that we respect very much and we want everything to be smoothened properly; these are procedurals steps that need to be taken and I think that, I’m sure, the foreign minister and his ministry are taking care of that. In the meantime, as you said, we have decided to send first team that will be operating with the support and the help of the current presidency of the European Union. It’s a rotating presidency, in this moment it’s Netherlands holding it. And I cannot foresee timing, but I can tell you what the hopefully future EU delegation will do, which would be mainly to support and sustain all the work that, for instance, today we have decided to start on re-launching dialogue and cooperation on many different sectors.

As we plan to develop dialogues on energy or economy or business presence here or technology or transport, many different sectors that require a lot of technical missions, exchange of missions, and a constant exchange with the Iranian authorities and services, obviously having a presence here would be helpful to develop this cooperation in a structured way, and also would provide  a support for all the business, companies and also the financial European sector that is willing to engage in Iran, providing a framework for the European engagement in the country from a technical point of view. So, I think this would be an extremely useful step to build the concrete results that we want to see coming out of our cooperation.

Tasnim: And you said the timing for the opening of the office may not be certain, but the timing of the sending that liaison team is certain now?

Mogherini: Yes, it’s going to be in the coming weeks.

Tasnim: And how they will work when the office is not open?

Mogherini: They will work together with the Dutch embassy.

Tasnim: And one issue which you may have been asked too much, I mean, in the trip or maybe before; it relates to some banking transactions that some maybe primary sanctions by the US have been causing problems, and even Iranian officials have been accusing US of breaching the JCPOA. Do you think this problem is a problem that can stop the deal, or can cause real problems to that? And what is the role that you are playing in this regard, because you have been playing major role in reaching the deal, and what are you doing now?

Mogherini: I am keeping the role of coordinating the special committee that is looking at the implementation of the deal, and this is a role that we will keep for the years to come. So, this is part of my role in the monitoring the implementation, but most of all, this is an important, very important, issue for the Europeans.

As we develop our trade and investment cooperation with Iran we also need, as Europeans, to have our banks to be present here to accompany these developments. So, it’s not only on the Iranian side that this is perceived as a very important issue, this is also on the European side that this is perceived as a priority, and we are working very hard with all the European banks, with the financial sector in Europe to, first of all, explain that the situation has changed, as the 16th of January, as you know, all the economic and financial sanctions that were related to the nuclear program have been lifted, so the banks and the financial sector in Europe are facing a completely different situation. We have provided them with full information about the change of the situation. The big banks maybe need a little bit of time to adjust to the new situation and adapt to the new situation. The small banks, we are seeing them coming in Iran, already in these weeks, many of them are coming, and many of them are accompanying this renewed commitment and engagement on the European side on doing business together with Iran, because we know very well that this is key. And we’re also talking about that with our American friends. They know how much this issue is very important for us as Europeans, and again, we cannot force anyone to do anything, but we can encourage, we can reassure, we can explain that the legal provisions are now completely different from before, and that there is no reason for European banks not to come to Iran. 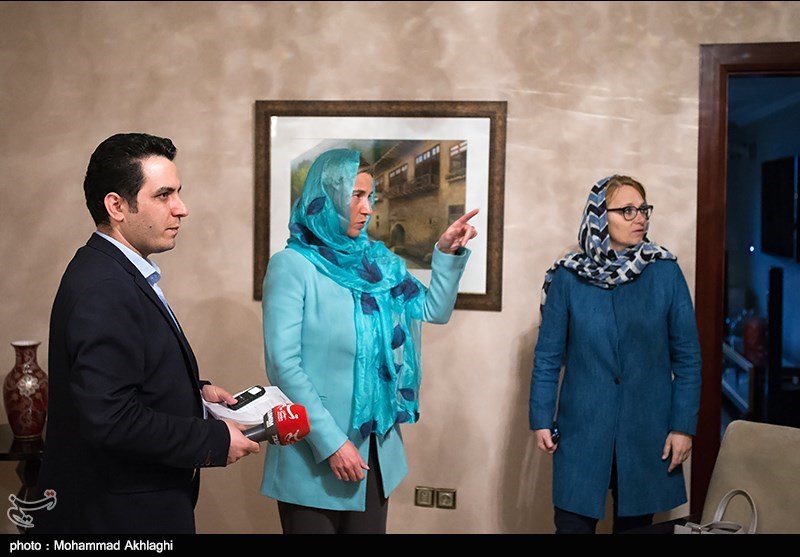 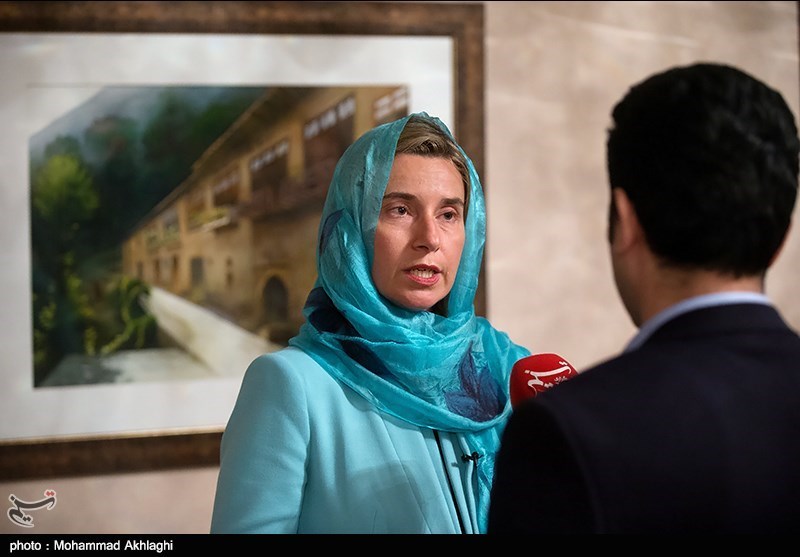 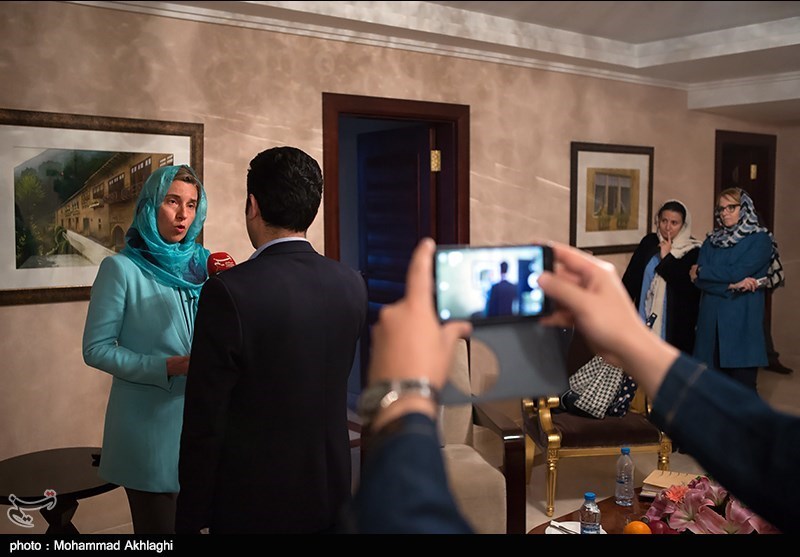 Tasnim: How much do you think your trip to Tehran can give the assurance or the confidence to the European banks or the entities in the EU to work with Iran?

Mogherini: I hope that…

Tasnim:  Is it a purpose of the trip?

Mogherini: The purpose of the trip is on one side to start this cooperation for real. Because I remember very well, last time I was here in Tehran we were saying together with Minister Zarif this is a turning point, (and) when we will have the implementation day, this will not only be a nuclear-related issue, but this will open the way for cooperation, practical cooperation in many different fields.

We have been working all over this months, together with the Iranian authorities, on preparing these different sectors, where we are engaging today. And this is bringing the new life in our relation. So my first, the first purpose of the trip, is to start, very practically, very concretely this cooperation in different sectors. Again, deciding to have a dedicated economic dialogue or energy dialogue, deciding to work on a technical level on transport or on migration, helping each other in facing the different challenges we’re facing today, and also taking the opportunities that the deal opens up both for Iran and for Europe, this is the main purpose of the trip. So, we know very well that, as Europeans, we have a special role, somehow. We are the ones that used to be Iran’s first partner on the economic fields, on trade, investment, and we want to be back to that. You see that, because you see many European delegations coming here, and we want to provide a common European framework for also the single member states of the European Union and the companies of the European Union to feel comfortable and come and engage within a common European framework; So, two purposes: start the practical cooperation, and this is what we have done today: the dialogue between the commissioners of the European Commission and the relevant ministers, and they have done very deep into the details of the cooperation. They’ve decided technical missions, and I see the engine starting. And also, reassuring obviously and inviting the Europeans to come and work here.

Tasnim: On this cooperation, do you think that the EU is -because there was some speculation that- EU is waiting to see the results in the US presidential elections; do you think….

Tasnim: Yes. So this is not a valid evaluation. EU played important role in Iran nuclear talks in achieving the deal, but regarding Syria, it seems that we haven’t seen that much, I mean, colorful role by the EU. Do you think, in future, will you have a change in this regard or playing a more active role?

Mogherini: We are playing a very active role on Syria, on two different issues in particular: the humanitarian support we are giving to people inside Syria and in the region, and also on the political track. And this is something I have discussed at length with my interlocutors here, in Tehran today, because we see a role both on the humanitarian and on the political track for Iran, as well. And, we have less of a role, on the military track, because the European Union as such is not involved in the military treaties in Syria.

We believe that it is good at this stage to have a coordination or a common effort from the United States and Russia in leading and co-chairing the support group –International Support Group- for Syria. This doesn’t mean that the European Union has less of a role. We are working very much, especially with the United Nations and our interlocutors in the region, starting from Iran, on how to accompany this process. And I believe that Iran can play a very important role in supporting the intra-Syrian talks that are starting now in Geneva. 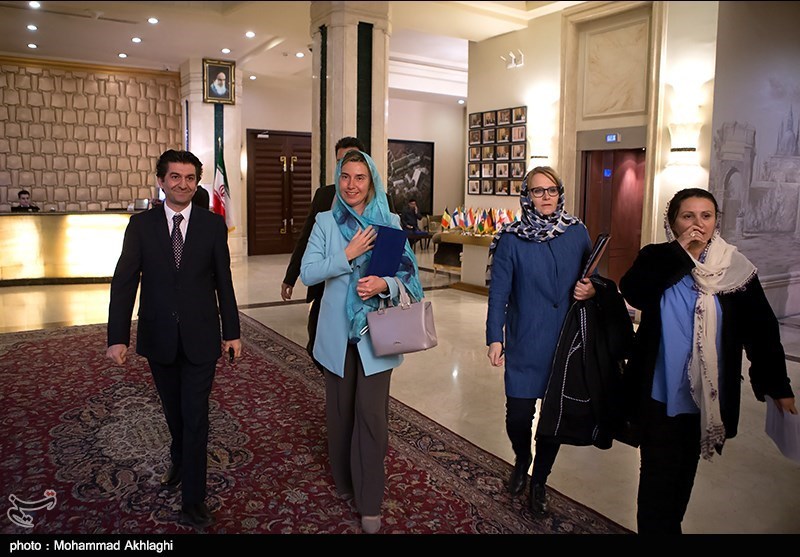