TEHRAN (Tasnim) – Nearly 2.5 million Muslims gathered at Mount Arafat, also known as Jabal al-Rahma (Mount of Mercy), southeast of the Saudi holy city of Mecca, for a vigil to atone for their sins, and then descended to Muzdalifa for the final stages of the annual Hajj pilgrimage.

Pilgrims clad in white robes signifying a state of purity spent the night in a sprawling encampment around the hill where God tested Abraham’s faith by commanding him to sacrifice his son Ismail. It is also where Prophet Mohammad (PBUH) gave his last sermon.

Other worshippers who had been praying in the nearby Mina area ascended in buses or on foot from before dawn. Some carried food, carpets for camping and fans to keep cool as temperatures rose towards 40 degrees Celsius (104 degrees Fahrenheit) before heavy rains and lightning erupted. 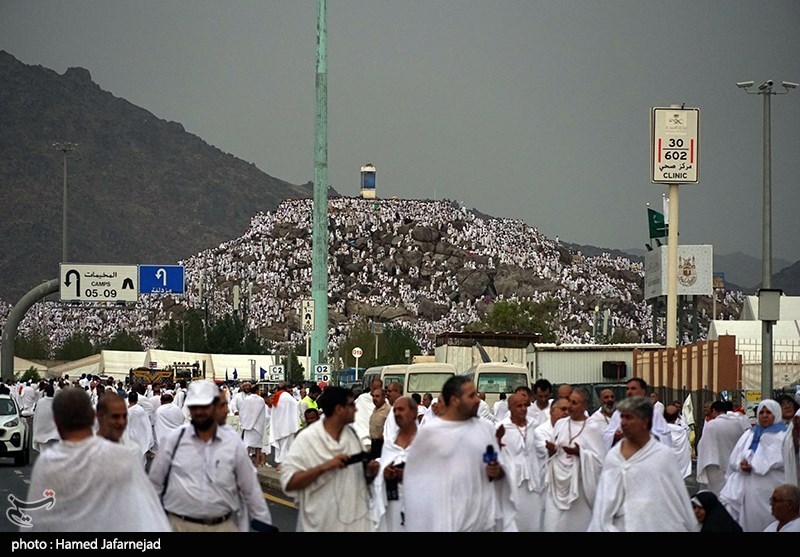 Once on the hill, pilgrims sat or lay in whatever space they could find. Many prayed, some cried and others took selfies or streamed videos to friends and relatives back home.

Some 2.49 million pilgrims, mostly from abroad, have arrived in Saudi Arabia, for the five-day ritual, a religious duty once in a lifetime for every able-bodied Muslim who can afford it.

After spending the day on Mount Arafat, the pilgrims moved at sunset to the plain of Muzdalifa to gather pebbles to throw at stone columns symbolizing the devil at Jamarat on Sunday, which marks the first day of Eid al-Adha, or the feast of sacrifice.